What to Feed Wild Birds

The small birds attracted to gardens such as tits, finches and sparrows carry little or no fat reserves, so it's vital they have access to energy-rich foods on a daily basis. In an ideal world that food would be natural, but our landscape is now almost an entirely man-made one and this has resulted in far less natural food for songbirds. For example, only a tiny fraction of our native woodlands remain, and the majority of the farms in the UK focus on maximum production which therefore excludes wildlife – for example, hedgerows have been removed and crops are routinely sprayed with insecticides. (However, the reverse is true on our farm – we very much manage our land with wildlife in mind.) So providing high quality, energy-rich foods helps compensate for the huge reduction in natural foods. All the foods we supply from Vine House Farm are of high quality and can be considered energy-rich. However, this is not the case with all bird foods on the market and it's important to avoid cheap mixes which, although they appear good value, generally contain 'fillers' such as pulses and even broken-up dog biscuit. This type of food has little nutritional benefit for garden birds, and may not be eaten anyway – which instead will just be creating waste and potential disease as it rots down. So rule number one: only buy high quality bird food and from a brand you can trust. 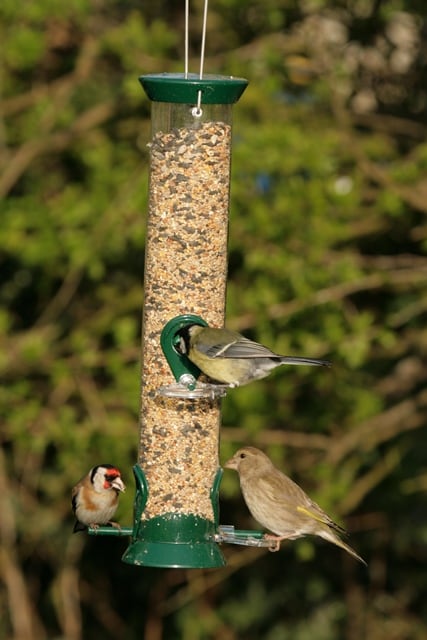 There are many different types of bird food which can be used to attract different species. Giving individual species a choice of foods allows them to go for types which they instinctively know are right for their needs and at different times of year – e.g. live bird food during the fledgling season. As a general rule, the more different types of food you provide AND in different ways (see our "How to Feed" Guide), the more species you will attract and in greater numbers. Common species such as Robin, Blackbird, Greenfinch and Blue Tit are virtually guaranteed, but even in more urban areas, it should be possible to attract species such as Goldfinch and Long Tailed Tit if the right foods are provided. Broadly speaking, bird food can be split into four main categories:

As the name suggests, our bird seed mixes contain a mix of seeds and, in some cases, other ingredients such as suet pellets and dried mealworms. The great thing about mixes is that you’re providing birds with a choice of foods in one location, with this benefiting each individual species and helping to attract a greater number of species overall. All Vine House Farm seed mixes are based on either oil-rich black sunflower seeds or sunflower hearts (which are simply the black sunflower seed without the husk).

These bird seed mixes contain a base of black sunflower seeds mixed with other types of seeds. This range includes our official: All of these mixes will attract a wide variety of bird species, though the fact that the black sunflower seeds are still in their husk will limit the appeal of the mix to species such as Blackbird, Song Thrush and Robin (none of these species can remove the husk as finches and tits can).

Ultimate bird seed mixes are the ones to go for if you want to minimise waste. Some of the mixes also contain extra ingredients such as mealworms and suet pellets – so very useful to attract more species and also important in the breeding season. Our ultimate mixes range includes:

How do I choose the right mixed bird seed for my garden birds?

All three types of the above will attract a wide mix of birds, but the premium and ultimate mixes will attract more than mixed seed simply because of the sunflower hearts having no husk, plus with ultimate mixes, you get extra ingredients such as dried mealworms and suet pellets. Other factors to consider are:

Our straight bird food products come as a single type of seed or other food, many of which have been grown here at Vine House Farm and include:

The obvious question is: Why feed straight foods over mixes?

Well for one, some of the foods above aren't contained in all of our mixes, so providing some straight foods in addition to mixes will help attract more species and give more choice. Some straight foods are also preferred to mixes by certain species, and examples include Goldfinches on niger seed and Greenfinches on black sunflower seeds – both species will, typically, favour that respective straight seed given the choice between this and a mix. The best way to decide which straight foods to feed alongside mixes is to experiment and observe. Then once you've seen the different bird species in your garden and what each prefers you can alter their feed according to their preferences. In addition, you can also produce your own mix from different straights.

Which straight bird food if I only want to use one? 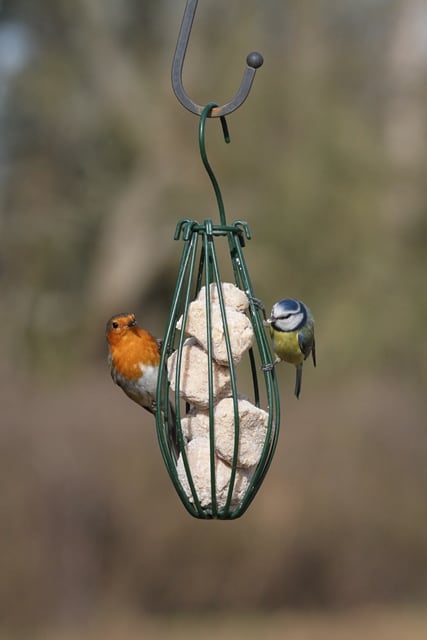 If you only want to feed a straight food in your garden and no mixes, then it really should be black sunflower seeds or sunflower hearts – preferably hearts as Blackbirds, Song Thrushes and Robins can also eat them. This is because both are preferred by more bird species than any other seed and their nutritional composition makes them the best all-round food.

At Vine House Farm suet bird food products come in the following forms: The popularity of suet products has soared in recent years and there are a number of reasons for this: Firstly, they are a cost-effective alternative to peanuts which have risen in price in the last few years due to global demand. Secondly, Vine House Farm’s suet products are produced in the UK so this reduces carbon miles compared to peanuts. And finally birds love them! Feeding suet products to your garden birds provides them with essential high-energy proteins, so it’s important to have at least one type available – in particular, if you don’t feed peanuts and especially in the winter months.

Firstly, the difference between the two is simply that super suet balls contain 50% more fat than suet fat balls. Up until recently, the industry typically called this type of product a ‘fat ball’, even though the fat in them was suet. So the product hasn't changed, it’s more that there’s been a recent trend in the market to call the product ‘suet’ rather than just ‘fat’. Both these products should be placed in a feeder like this one, with the main species they will attract being Blue Tit, Great Tit, Coal Tit, Long-tailed Tit and Starling, though other species will feed on them including the Great Spotted Woodpecker and Siskin. 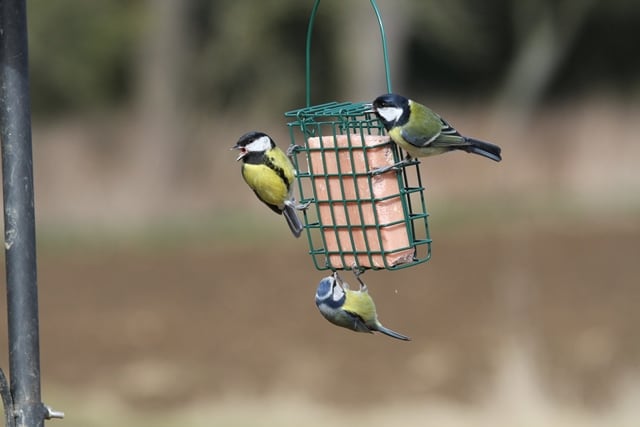 These should be placed in a feeder similar to the one mentioned in the image. Suet blocks will attract similar species to suet balls, but because of the nature of the cage they go in it is relatively easy for ground-feeding species such as Robins and even Blackbirds to stand on top of the cage to feed (hanging the cage next to a branch will also help them).

Suet pellets are especially loved by ground feeders such as the Blackbird, Song Thrush and Robin. At Vine House Farm we have four types of suet pellets including: They’re best fed on one of these types of feeders on either bird tables and ground feeders, mesh peanut feeders or suet bird feeders. Increasingly, suet pellets are being purchased and fed as a more cost-effective alternative to peanuts. In addition, Vine House Farm Suet Pellets are manufactured in the UK, so, therefore, carry less of a carbon footprint to imported peanuts (which typically come from China, Argentina and the USA).

1. Fat/suet balls in nets Never buy these as birds’ feet can become trapped in the netting and the bird will die if that happens. 2. Cheap fat/suet balls If the product is very cheap, then chances are that there’s relatively little suet in the ball and fillers such as sand are used to keep the cost right down. These cheap products should be avoided, as the food value of them to birds is limited.

With live bird food we’re talking about: Of course some people reading this will already be put off by the thought of all those little wiggly creatures – don’t be!! Yes the first time you open the packet and put them out in a special feeder it can be a bit odd, but you’ll soon get used to it. But in any event, the benefit to your garden birds, particularly during the fledgeling season, is so great that it’s worth even the most squeamish bird-lover putting up with them. To understand just how valuable live foods can be to garden bird populations, we asked one of our customers to tell their tale of success…

About six years ago I moved to a village in South Northamptonshire which had a relatively small population of House Sparrows. The issue wasn’t a lack of breeding sites – the village was full of old properties and farm buildings which would both be ideal – but more, it seemed to me, a lack of food. The reason for this was intensive farming and an obsessively tidy farmer (his farm was the main one in the village) who sprayed and killed every weed around his farm buildings. So I decided action was needed and started a weekly order of live mealworms throughout the fledging season. The result? In 4 years I roughly quadrupled the population of House Sparrows.

The scenario our customer describes may well be very different to where you live in terms of farm buildings etc. but chances are a lack of food in the fledgeling season won’t be – whether you live in the countryside or an urban area. This is just a fact of life in the modern world we live in. And it isn’t just House Sparrows which will benefit from live feeding, but many other species including Robins, Blackbirds and Song Thrushes will too. 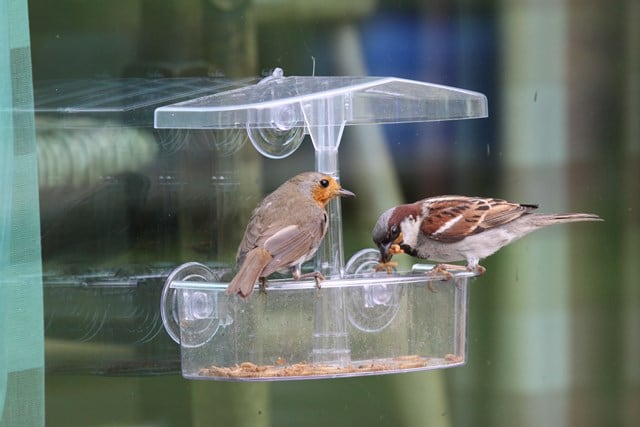 Why live foods over other foods for feeding birds?

It’s because they provide an unbeatable combination of protein, fat and moisture. And the moisture element is really very important, as parent birds can only provide their young with liquids through food.

What feeder do I need for mealworms and wax worms?

We have a range of different live bird food feeders.

What exactly are mealworms?

Mealworms are the larvae form of the Mealworm Beetle, ‘Tenebrio molitor’, a species of darkling beetle.

What are wax worms?

Wax Worms are the larvae form of the Wax Moth, ‘Pyralida’.

How about dried mealworms?

If feeding live mealworms really aren’t something you can handle (though you really should try first), then dried mealworms are an alternative (though certainly aren’t as good). If you are feeding them in the fledgeling season, soak them in clean water first.