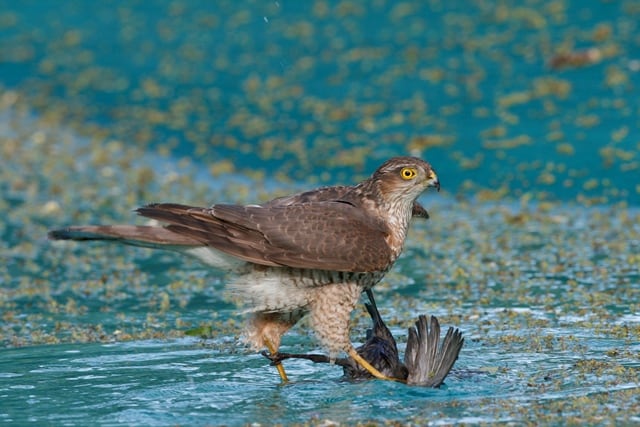 A sad fact about feeding the birds in your garden is that some might fall victim to predators; the main two being Sparrowhawks and cats. They might also meet a man-made hazard such as flying into a house window.

As far as Sparrowhawks are concerned, their population has been steadily increasing after a serious decline in the 1950s and 60s, and is only now getting back to a reasonable level. So although the sight of a sparrowhawk taking a bird from your garden may not be a pleasant one, it shouldn't be seen in a negative way - the sparrowhawk needs to feed just as much as your other garden birds do. Plus, Sparrowhawks are a stunningly beautiful bird and their appearance in any garden should be seen as a privilege.

Cats though are a different issue and are the major cause of unnatural bird fatalities in the UK. In fact the RSPB estimated that there are around 9 million cats in our country killing an average of 30 birds each per year. That adds up to a truly frightening yearly total of 55 million birds.

In a statute of nature, a balance between predator and prey exists, whereby the number of predators fall if the prey species diminishes dramatically. However, this balance is non-existent in the case of domestic cats, because they are not reliant on their prey for survival. So their numbers could continue to increase even if the bird population were hypothetically to disappear altogether.

Can you stop cats killing birds? - Dealing with cats as predators to garden birds

Cat owners can significantly help to reduce bird kills by cats by taking the following measures:

Where to put bird feeders in your garden

Just like positioning of nest boxes is important, the positioning of bird feeders in your garden has a major bearing on how vulnerable birds are to attack from cats. The ideal is to have the feeders grouped together and not too far from the cover of vegetation, but far enough away so a cat can’t easily pounce. The reason for not positioning feeders very far from cover is, whilst this would help minimise the risk of attack from cats, it would increase it for Sparrowhawks because the birds would have further to fly to take safe cover. So it’s a sensible balance between the two that is needed.

Grouping feeders together means birds will feed in larger groups and this is essentially a ‘safety in numbers’ thing. So the more birds there are, the more likely one will spot an incoming predator and raise the alarm (a defensive call which all garden birds have – albeit different for each species).

The height of feeders from the ground is also important, and should generally be of a height that a cat couldn't jump up to.

Minimising the risk of birds flying into house windows

In particular for smaller gardens, it’s inevitable that feeders might be placed relatively close to the house. Plus, if the bird feeders are too far away you can’t easily enjoy watching the birds. Window strikes can therefore be a problem, but we have the perfect solution in the form of window alerts, which can be seen by birds but not so easily by you from inside your house.