Wildlife on the Farm

Nicholas Watts gives a personal overview of the wildlife at Vine House Farm, and outlines some of the specific measures he has taken to improve habitat and the breeding success of a number of key species of birds. 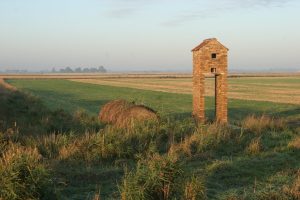 Our farm here in Deeping Fen is alive with wildlife, especially farmland birds. It is however down to the surveys that I have carried out over much of Deeping Fen. These surveys have shown me where the birds are and where they aren’t. There is one piece of habitat that stands out above all the rest in Deeping Fen - basically ponds and bushes so I have replicated that habitat five times on my farms.

Modern farming has unfortunately taken its toll on many farmland bird species which are finding survival increasingly difficult as our modern farms are becoming ever more efficient at reducing weeds and insects. Read more about some of the conservation measures we have put in place that has enabled some of these bird species to increase.

In 1984 I could only find three pairs of Barn Owls in Deeping Fen. We had some redundant farm buildings so I started installing nest boxes, which were taken up the next year. This has clearly shown us that nesting habitat was one of the barn owls main issues here in the Fens. Over the years, I have put more nest boxes up and built five brick towers for them. Countryside Stewardship schemes have helped and paid for 35km of wide grass margins. In 2014, I had 13 pairs of Barn Owls breeding on the farm and they raised 87 young. In 2015, no pairs bred successfully as the large number of young that were bred in 2014 had eaten nearly all the voles.

The brick towers quite often have five species nesting in them: Barn Owl, Kestrel, Stock Dove, Jackdaws and Tree Sparrows. In 2015, one tower had a sixth species which was a Mallard; it nested and hatched before the Stock Doves wanted to lay. 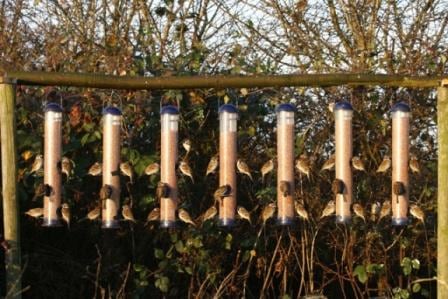 Tree sparrows have always been in Deeping Fen, nesting in old farm buildings or even in the base of carrion crow nest, as we have so few trees with holes in. About five years ago I noticed we had Tree Sparrows centred around some ponds I had dug so I started to feed them on Red Millet. They seemed to like the red millet best so that is what I have fed them on ever since. In the last 2 or 3 years numbers have been building up, and we now have a colony of about 200 birds in the surrounding area around the ponds where I have been feeding them. I have put up nest boxes for them and they also nest in the surrounding redundant farm buildings. The whole population of Tree Sparrows in Deeping Fen is centred around these ponds, so four years ago I started to replicate the ponds in five other places around our farms, with the hope that the Tree Sparrows will spread and they are spreading. In 2014 I ringed 300 nestlings from 65 nest boxes, so in 2015 we put a further 35 up, meaning around 900 were ringed the following year.

Tree sparrows, like House Sparrows, need insects to feed to their young and we have more food than nest sites, so by putting up more boxes at various sites around the farms near water, insects can be easily found. Where I have good habitat Tree Sparrows have three broods and some attempt a fourth brood.

The four ingredients for attracting Tree Sparrows are: a pond, a hedge with many species of bushes in it, a feeder with red millet next to the hedge and other insect rich habitat nearby.

Whitethroats have increased steadily throughout the years of my surveys, though there have always been more pairs on our farms than on other local farms.

Whitethroats like to nest in vegetation that is still standing from the previous year –in other words places that weren't flail mown the previous autumn. I was the first farmer in this area to have wide grass margins with a redundant ditch alongside, which all helps to increase the type of habitat that they require. We try to use the flail mower as little as possible. When the flail mower is used during the summer, it is disastrous to wildlife.

Whitethroats are summer visitors to the UK and arrive during the second half of April. The males arrive first and set up their territories, and it gives me great pleasure to hear their scratchy song in various parts of the farm because I know they are in habitat we have created. Like all birds some males move around a bit, perhaps if they haven’t attracted a wife after awhile they will move. They build a delicate nest always off the ground amongst dead nettle stalks or other dead stalks from the previous year and lay four or five eggs. They are double-brooded and have finished their second brood before the end of July.

Numbers fluctuate annually but in the mid-90s we started off with three pairs at Deeping Fen Farm and have since had as many as twenty two pairs on that farm of 662 acres.

Sedge Warblers like to nest in a wet drain or ditch that has not been mown out for at least two years, and also prefer more tangled vegetation than reed warblers. They arrive with us in April and have finished their second brood by the end of July. They also like to nest in a wet ditch next to an oil seed rape field - three quarters of those birds nesting in Deeping Fen will be next to, or in, a field of oil seed rape. Their population crashed between 2002 and 2006, as the acreage of oil seed rape had dropped, but by 2010 the population was back up to 2002 levels, because the oil seed rape acreage had again increased. 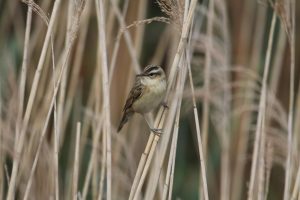 There is no doubt that the high numbers that we have on Deeping Fen Farm are due to the network of redundant ditches that we have retained. These ditches are cleaned out about every 10 years, to makes sure that water can flow more easily through them.

We do have other farmland birds on our farm and in our local area. Some of these species are thriving, while others are sadly declining and struggling to survive due to our modern world. I could carry on writing for an age but here is a brief list of some of the other farmland bird species we see, here in my survey area:

Grey Partridge - there is a small steady population.

Meadow Pipit - have been in sharp decline but in the last three years have made a recovery. They do enjoy the wild flower meadows.

Reed Warblers - like to nest in reeds that are not cut every year. As I have persuaded our drainage board to only cut our main drains one side each year, we have far more than we used to do, but they are now declining because we lower our water levels during the winter, which is exactly the opposite that happens naturally. We have to lower the water levels during the winter to provide a reservoir in case of heavy rain. As the fish and insects normailly hide and feed in the marginal vegetation during the winter, this means we have starved our fish and insects and exposed them to their predators. Now we have very few fish in our drains and less insects which the Reed and Sedge Warblers need to feed to their young.

Yellow Wagtail - a major stronghold area for the species but the population is in decline.

Linnet - there are far more linnets on our farms than others in the area as they enjoy our cultivated weed margins, although the population is in decline.

Lapwing- a local success story with several more pairs nesting in the last few years and in 2014 we had about 50 pairs breeding on the farm.

Mallard duck - they have seen a catastrophic decline due to lack of insects and modern drainage.

Turtle Dove - these summer visitors have only ever been declining in my lifetime. I heard one singing a few times in 2015 but didn’t see any evidence of breeding.

As well as guided tours, we do have a nature reserve at Baston Fen where you can see a variety of birds and wildlife. Most years we have common terns breeding as well as black headed gulls, oystercatchers and Lapwing.  You are more than welcome to visit our nature reserve and use the bird hide.

From the farm shop turn right out of the gateway and continue on the main road out of the village of Deeping St Nicholas. After about 5 miles there is a right hand turn towards Baston Fen. Take this road to the end, which is about 2 miles. At the T-junction turn right, continue along the road for about 1.5 miles until you come to the first building on the right hand side which is an old barn. Our nature reserve is here behind the yellow gates. The nearest postcode for the nature reserve is PE6 9PU, which will take you to within a few hundred yards.