Guide to Putting Up Nest Boxes

Why should you provide nest boxes for birds in your garden?

Providing nest boxes for birds in your garden is a great way to attract different species of birds, plus it is fun and very rewarding to watch the whole process of birds first taking the box, building their nest, feeding their young, then the young emerging for the very first time. You can even watch what's happening inside the box with one of our Nest Box and Camera kits!

What birds use nest boxes?

The two garden birds most likely to take up a nest box are Blue Tits and Great Tits.

This is because individual species of birds like to use a hole which is just large enough for them to get into – which is also a good defence strategy as larger predators then can’t enter the box. For birds which use an open-fronted box, the size of the opening is much less of an issue and a ‘one size fits all’ approach can be used.

This chart shows you which type of nest box and opening hole size different species of garden bird will use:

Different species of songbird favour different nest box hole sizes, with extremes being a small 25mm hole for blue tits, and 45mm for starlings. There are also more specialist boxes with different shape openings such as this one for swifts.

Nest boxes with a hole are prefered by blue tits, great tits, nuthatches and tree sparrows. House sparrows also use nest boxes, with the hole being similar to a gap in masonry in an old building – their traditional nesting choice.  Starlings nest in holes in trees and building cavities, so will readily take a nest box.

For open fronted boxes, these are used by species which like to nest in fairly dense undergrowth, and include robin, blackbird and song thrush.

Where should nest boxes be placed?

Always ensure that you pick a spot which is out of continual direct sunlight, as the box will become too hot and could kill the young birds inside. So never put a nest box in a south-facing position. Choose a tree or a wall, but ensure there is some cover around or close to the box.

If it’s an open-fronted box, then this must be tucked well into foliage – e.g. a climbing plant on a wall so it is not obvious to predators.

Next, ensure the height of the nest box is at least 1.5 metres above the ground. Where you site nest boxes in your garden is important both to the likelihood of the box being used by birds, and the health and welfare of the birds once in it.

Which direction should bird boxes face?

The number one rule is never to position a nest box where it gets day-long direct sunlight, as it will simply get too hot inside and any young birds will perish. So avoid south-facing aspects, plus also exposed west-facing aspects which are likely to get blasted by wind and rain. The ideal position is a sheltered north or north-easterly aspect. A tree, wall or even a high fence post can be used to secure the nest box too, but generally, the nest box should be at least 1.5 metres above the ground.

For open-fronted nest boxes, these should always be tucked away in vegetation so they’re not obvious to predatory birds such as Magpies. So a wall or fence which is covered in ivy or other vegetation is ideal.

When is the best time to put up a bird nest box?

Any time of year is fine, but autumn or early winter is best as many species of bird will start looking for a nest site as early as January. Even if it is January - a good few months before your garden birds get down to the serious business of raising a family, it is still a great time to put up nest boxes.  For one, some species – in particular, Blue Tit and Great Tit – will spend a month or more investigating a suitable nest site before making a decision, and that process can often start in January. In addition, a nest box put up ahead of the very cold weather also provides a warm shelter for roosting birds. So, even if the nest boxes you put up now aren’t adopted by breeding pairs in the months ahead (sometimes it takes more than one season before they’re first used), they will also serve as a safe and dry roosting place to get birds through the long cold nights. And this can be witnessed by keeping an eye on the nest box entrance at dusk, when all of a sudden a Blue Tit, Great Tit or even a few Wrens (who despite their strong territorial instincts often roost together) may disappear through the hole and hunker down inside for the night.

How do you attract birds to a nesting box?

How long will it take until a bird takes up residence in a nest box?

Sometimes a nest box will be taken in its first season, but often you have to wait until the following year. If the box isn't taken then, then there’s a good chance it won’t be, so try moving it to an alternative position.

Should I move my nest box?

Sometimes a new nest box will not be taken up in the first season, so if that happens then leave it for at least a year and hopefully it will be taken the following breeding season. After that and if it hasn’t been, then moving it to a different site is the way to go.

Nest Box Maintenance - Do you need to clean out nest boxes?

Once a nest box has been used, it’s essential that the old nest is removed. If it isn't removed, species such as Blue Tit and Great Tit won’t use it again.  The best time of year to clean nest boxes out is early autumn, with the old nest being discarded and any other materials brushing out.

In addition, cleaning the box out will also remove small parasites and other invertebrates (earwigs, for example) which will often also take up residence in the box. When you clean out the box, just use a small stiff brush – no need to use water, as it’s best to keep the inside of the box as dry as possible.

How can you watch your nest box?

By using one of our Nest Box and Camera kits, you can watch all the stages of use from the birds first arriving, to the adults incubating the eggs, the young hatching, the young being fed by the adults, and finally the young leaving the box for the first time.

Special Nest Boxes for Other Species

If you have the right sort of property, both Swallows and House Martins can be attracted to nest. For both these species, they typically build their own nest but Swallows will take this artificial nest (though will add materials to it), and for house martins the presence of this type of nest box may well attract them to build a nest next to it even if another pair do not use the box you've put up.

Swallows need a relatively flat area to nest – e.g. a timber beam – and in an open building such a garage, large shed, porch or stable. House Martins normally nest under eaves and generally at a gable end of a building. Swifts traditionally nest in the eaves or gables of buildings. Modern houses and renovated buildings exclude swifts, therefore, putting up a Swift Nest Box is an easy way to replicate these nesting places. The ideal site for Swift Nest Boxes is under the eaves or on walls facing north, northeast or north-west out of direct sunlight. Place five metres above the ground, with clear adjacent airspace so swifts can access it in a high-speed direct flight. We have a full range of Nest Boxes for all the species described above, plus larger boxes for owls. 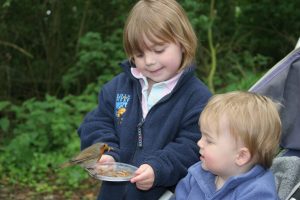 Why do we feed wild birds?

Bird feeding - it is massive! Let’s get one thing straight, the importance of feeding wild birds should not be underestimated - it is...
Read More 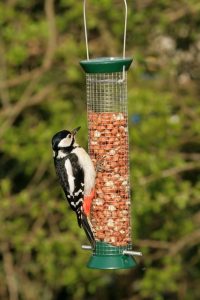 Attracting wild birds to your garden is both hugely enjoyable and very rewarding, plus it also helps wildlife conservation and specifically helps reverse the...
Read More