House Martins normally arrive back on our shores from sub-Saharan Africa during April, though some years these small, acrobatic white-rumped birds will start to appear at the end of March. This year though, the main migration was rather later with many birds not arriving until early or even mid-May. More worryingly still, the number of returning birds seems to be lower – which continues a trend of decline, with a study carried out between 2001 and 2011 showing a 16% drop in numbers. 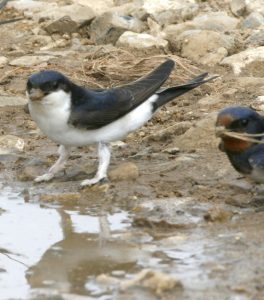 House martin collecting mud for its nest (swallow to its right)

The reason for the late arrival of House Martins and other migrants including Swallows and most species of Warbler is thought to be weather-related and specifically storms in France and an unseasonal northerly wind which the birds had to battle against.
Reasons for the decline in numbers of House Martins are more complex and not yet fully understood, though a reduction in flying insects due to modern farming methods is almost certainly a factor.
Anyway, the House Martins that are back with us for the summer can now do with all the help they can get to ensure a successful breeding season.
You might think that as we’re already in early June there’s not much you can do to help with their nesting, but actually, it’s not too late in the breeding season to give House Martins a helping hand! House Martins often wait for around four weeks before looking for the right nest site and starting to build.


So, what can you do to help House Martins?

So it’s not too late to help House Martins out this breeding season if you get cracking now.