Wildlife In Your Garden with Steve and Liz Dudley

Wildlife In Your Garden, with Vine House Farm

Steve and Liz Dudley kindly answer our questions on how they have created their own wildlife garden in the Cambridgeshire fens.

Where do you live – town or country?

We are lucky to live in the fens two miles from the nearest civilisation. There’s around 12 houses along a couple of miles of farm drove here. Our house sits within a small huddle of several old farm workers cottages. We’re a semi and the two semis have arable fields on all four sides – oil seed rape, potatoes, onions, wheat, barley – it changes every year!

How long have you had your current garden?

Steve first moved here in 2002 and when we married in 2006, we bought the house next door and doubled the garden! But it wasn’t until we’d finished the main house conversion that we got round to the garden. The back garden was full of sheds (six!) and lots of hard standing. So it wasn’t until 2012 we knocked everything down and built a whole new garden from scratch in one summer. We’re taking work on the front garden a little slower!

How big is your garden and what are its main features?

The main garden at the back of the house measures around 25m x 15m. It’s a real mosaic with some formal beds (planted with insect-friendly plants), a clover lawn, a large pond, a meadow area and a veg plot.

The front garden measures around 15m x 15m. A gravel drive separates two lawn areas. We have leylandii as a shared hedge with the neighbour and a line of maples along the open side to the fen. We have several fruit trees (apple, pear and quince) and small area of formal planting, again with insect-friendly plants.

How many years ago did you start actively trying to help the wildlife in your garden?

We’ve always put out bird food and grown things like buddleia for the butterflies and insects, but it wasn’t until 2012 when we created a whole new back garden from scratch that we developed it properly for wildlife – birds, butterflies, moths, bees, dragonflies, hedgehogs – the lot!

What have you done to increase wildlife within your garden?

What have we not done! It’s all about creating a mosaic of habitats at all the different scales you need – garden scale for birds, smaller scale for insects – a lawn, a pond, a hedge – whatever you need to attract what you want in your garden.

The front garden is our main bird feeding area. Steve works from home and his office looks over it so he can keep an eye on who’s scoffing all our Vine House Farm bird food! We have a funky old cast iron pig trough as a birdbath and drinking station. Its great! We call it the ‘sombrero’ because it looks like a large Mexican hat!

The front garden used to be open to the front and one side, but we’ve allowed a line of maples to grow up to provide some shelter and additional habitat. Birds in particular need cover to go in to when there is a predator around. They also provide a great tree line for dragonflies to feed along and for butterflies to bask on.

The new back garden now has everything – a large pond, a meadow area, a clover lawn, insect-attracting flowers, bird feeding stations, bug boxes, wood piles, etc. It’s just alive with insects! We’ve created a mosaic of habitats in relatively small space and the rewards have been immense in such a short space of time.

What have been your main successes?

The pond is just fabulous. It adds a completely new dimension to a garden. It’s around 7m x 2.5m and 1.8m deep. Although we have lots of dykes around us, having water in the garden attracts so much more. We’ve recorded 16 species of dragonfly, of which 10 species are breeding. And it’s just full of aquatic invertebrates and sticklebacks. Steve built the pond with wildlife garden specialists Hazelwood Landscapes. They’d never done a pond like ours, but between Steve and Hazelwood co-owner Jim Ashton they created a fabulous pond that Jim says has matured faster than any other wildlife pond he’s ever done.

Our bird feeding station is pretty fab too. When Steve first moved in he trialled different seeds, straight and mixed, and worked out which seeds our birds were eating and which they weren’t. This means we could tailor our seed mix precisely to our garden birds. He also spent months moving the feeders around to get the preferred feeding sites. We also have several areas we rotate the feeders around to prevent the risk of disease. Our garden bird list is 139 – the third highest in the county and we look over nothing but arable fields – the two gardens with larger lists both overlook major waterbodies.

After a few years absence, we see hedgehogs almost nightly again and find lots of their little poos all over the place so they seem to be enjoying their new garden too! Apart from providing good natural foraging for them, the key is to ensure that all your boundaries are hedgehog-friendly and they can wander in and out in all direction.

What hasn’t worked so well and perhaps why?

You soon forget the failures! One bird feed we could never get on with was nijer seed. We have plenty of Goldfinches but they never took to the special feeder and seed preferring Vine House’s home grown sunflowers instead!

We tried planting a camomile lawn, but that didn’t work. The grass grew but the camomile didn’t. Steve is now researching non-grass lawns for the front garden.

What is the favourite part of your garden?

For Steve it’s got to be the pond. He sits by it nearly every day enjoying the many creatures which use and visit it. Liz loves the more formal borders she’s created on one side of the garden – she loves all the insects her planting attracts.

What wildlife visits your garden on a regular basis and which give you the most pleasure?

Woah! Too much to mention!

The thing we’re most proud of are our Tree Sparrows. There’s been a birder here on the fen for over 40 years, and we know another birder who watched the fen regularly before that. So when the Tree Sparrows turned up in 2003 we were pretty confident they’d hadn’t occurred here for at least 60 years, if ever. We built up a colony of 17 pairs but have dropped to only seven pairs this year. Its probably still the main site for the species in Cambridgeshire such is their decline elsewhere. They are a very flitty species and colonies can up sticks and disappear so we’ll not hold our breath. 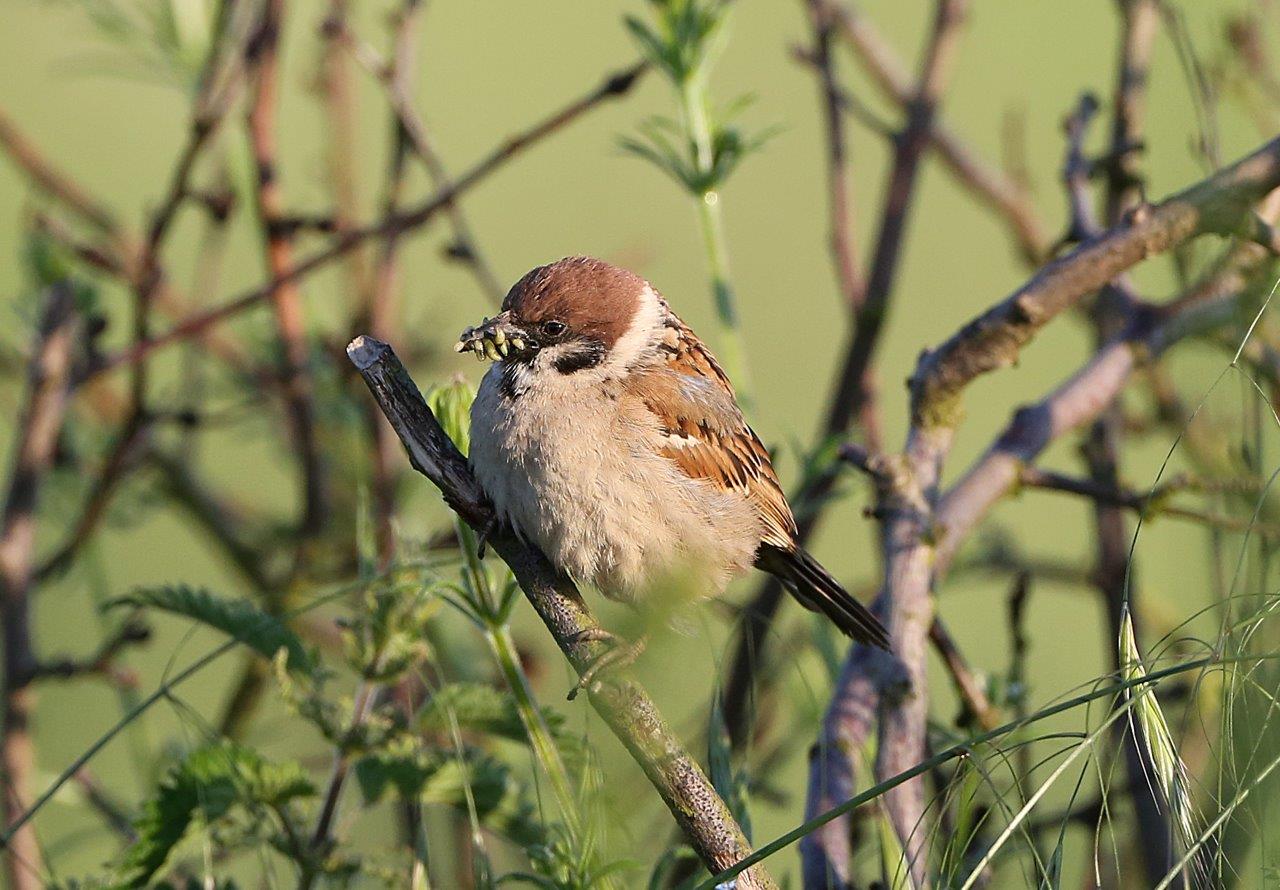 We get Reed Bunting, Corn Bunting, Yellowhammer and Brambling are all regular winter visitors and we once had two Cranes fly over!

Other than birds, Steve is a dragonfly nut (he’s author of Watching British Dragonflies) so the pond is his pride and joy and all the dragonflies that frequent it. He’s now waiting for Lesser Emperor and Small red-eyed Damselfly to find it – he’s recorded both species on the nearby fen.

Getting hedgehogs back has been brilliant.

And we have leopard slugs – lots of them! They are great things to have as they prey on other slugs.

What is your favourite Vine House Farm food?

We use bags and bags of their High Energy Seed Mix. We mix in red millet as Steve discovered Tree Sparrows love it (something he shared early on with Nicholas Watts at VHF and Nicholas now has a huge red millet feeding station just for his Tree Sparrows!). We get through a lot of suet products too – the suet pellets have largely replaced peanuts. We still feed some peanuts but find they go quicker if we mix them with suet pellets – the birds just move on to the peanuts once they’ve polished off the pellets!

Is there anything you’d like to do that you can’t?

Buy the field behind the house! We’d create a huge meadow area around a shallow lake – it’s the only way Steve is ever going to get the garden bird list any higher!

Anything else to add? Links to websites?

Our garden was featured by Bird Watching magazine in 2012 and by BBC Look East once for garden bird feeding story!

Steve often posts photos and sightings from the garden on his blog athttp://toadsnatcher.blogspot.co.uk

You can see more pictures of our garden and its development on our hosue renovation blog at http://crowtreecottages.blogspot.co.uk