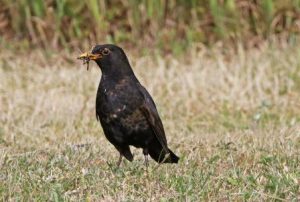 All about the Blackbird

As part of our monthly series which focuses on a particular species of garden bird, this month it's the Blackbird – a bird we’re all very familiar with but perhaps there’s more to know?

The Blackbird is our most common species of thrush, and is highly versatile when it comes to habitat with the only real requirement being a degree of cover – even if it's only scattered bushes – for hiding from predators, roosting and nesting. This means that the species can be found everywhere from rugged coastline, rich deciduous woodland, urban gardens, arable farmland with hedgerows, rocky hillsides, and even in areas of decorative planting around the edges of your local supermarket car park. Though like many other species of garden bird and including the Robin, the Blackbird was originally a woodland species but has adapted over the millennia as man has radically changed the landscape of the British Isles.

This level of versatility also helps account for the Blackbird’s relatively large breeding population, with the current BTO estimate putting this at 5.1 million breeding pairs (2009 figure). However, the number of Blackbirds in the UK is greatly swelled in the winter months and may reach up to 15 million birds, with the additional ones coming from Scandinavia and mainland Europe. This invasion usually takes place between September and November, with the birds often arriving in mixed flocks with their thrush cousins - Fieldfares and Redwings.

The breeding season for Blackbirds starts relatively early in the year – in fact right now in early March. The female bird builds the substantial and well-hidden nest, and there are generally two to three broods per season – sometimes even a forth will be attempted if the weather conditions are right. 5-6 eggs are the norm, which the female incubates though sometimes with help from the male. Both sexes feed the young.

As will be very evident from watching Blackbirds in the garden, other than the breeding pair and their fledglings, they’re not a terribly sociable species! Indeed, even outside the breeding season, individual birds show little tolerance to those of the same species and will almost continually squabble if one gets too close to another – e.g. at a bird table or ground tray full of food.

Which brings us onto the Blackbird’s diet, which is also rather varied and a further reason for the species’ relative success in our changing world. Earthworms are certainly a key food when available (for example in warm but wet weather when these invertebrates are closer to the surface of the ground) but also a huge variety of insects – with these being a vital food for young birds in the nest and for fledglings. But in the autumn and winter months and certainly when the ground is frozen or covered in snow, there will be an immediate switch to berries and fallen fruit. For berries, native species such as hawthorn and holly are important, but here again the Blackbird’s ability to adapt to what man has to offer is evident, with exotic ornamental species including pyracantha and cotoneaster often providing an abundance of orange and red berries respectively. As it happens, cotoneaster is often planted around supermarket and other car parks, and hence why Blackbirds are often seen in such places in the winter months – and funny to think that a Blackbird which may have bred in a forest in northern Finland, ends up happily spending its winter in a Tesco car park on the outskirts of Bromsgrove.

For foods you can put out for Blackbirds, sunflower hearts, suet pellets and sultanas soaked in water are all favourites and will be readily taken if placed on a bird table, ground tray or directly on the ground. Feeding the foods in this way is essential, as Blackbirds cannot cling on to a hanging seed feeder (though may try to do so). In the breeding season, the absolute best food is live mealworms - indeed, providing a supply of live mealworms in your garden from about now until mid-summer, is the very best way to help the breeding success of this much-loved bird species.