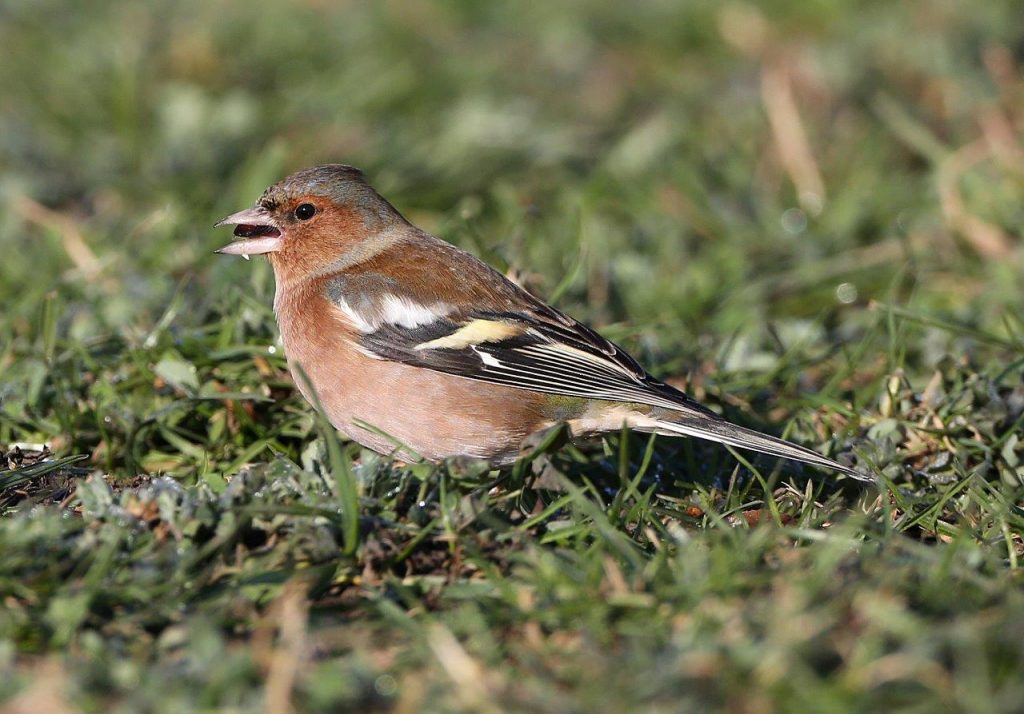 All About the Chaffinch

In the seventh of our monthly series which looks at a specific species of garden bird, this time it’s all about the Chaffinch.

What is a Chaffinch?

Chaffinches are undoubtedly the generalists of the Finch family: they’re adaptable and don’t require special habitat to breed in or special food to eat, with this resulting in them being the second most common bird in the UK.

This ‘good all-rounder’ is evident in the part of their anatomy which tends to tell us the extent to which a species of finch has evolved to favour particular foods and feeding styles: its bill, which is not too pointed or too heavy.

In comparison, the Goldfinch has its longer and more pointed bill, which it uses to extract seeds from the heads of teasels and other thistles. The Siskin also has a similar shape bill for extracting the seeds from Alder trees and the cones of conifers, whereas the Greenfinch has a heavier and triangular-shaped bill for cracking open larger seeds.

And of course, such successful adaptations can be seen in action on the feeders in your garden: Goldfinches and Siskins using their relatively thin bills to extract Niger seed from the tiny holes in the feeder, and Greenfinches using their heavy bill to easily crack open black sunflower seeds. Chaffinches can just about manage both these feats, but not especially well and are much more likely to be on the ground below the feeder mopping-up dropped niger and pieces of discarded sunflower hearts.

Whilst we’re mentioning hanging feeders, Chaffinches will readily go onto them to eat smaller seeds and sunflower hearts – the latter is a real favourite – but they can struggle a bit on feeders with straight perches (often fluttering their wings to gain balance which uses up valuable energy in the winter months). So the answer is a feeder with round perches or fit Perch Rings which simply slide over straight perches – both options meaning that the birds will easily be able to land, settle and immediately start feeding. That said and given the option, Chaffinches will usually choose to feed on the ground and especially if there’s a seed mix provided such as our Premium Finch Mix (spread it over a largish area such as driveway or patio).

The species is also unusually tame and sociable, and not just by finch standards but songbirds generally. Indeed, Chaffinches can become so tame when fed regularly in a garden, that they’ll approach and flutter around people in the expectation of food if the feeders are empty or seed is usually provided on the ground or a table.

The number of breeding pairs of Chaffinch in the UK is about 6.2 million, though the total population approximately doubles this number in the autumn and winter months with a large influx of birds from northern Europe – in particular from Finland, Sweden and Norway. During these months the species becomes very gregarious with large flocks forming – and sometimes mixed with the not dissimilar Brambling. Interestingly, the flocks are often predominantly of one sex or the other, with this well-recorded behaviour leading to the species often being called the ‘bachelor bird’.

Chaffinches will breed in a wide variety of habitats provided there are trees and bushes, including deciduous, coniferous and mixed woodland, edges of commercial conifer plantations, hedgerows and gardens. It is the female that builds the nest, which is typically in the fork of a small tree or bush and is made from dry grasses, spiders’ webs, and then covered in moss and lichen to blend in with the immediate area around it. The female incubates the eggs alone, although both parents feed the young. There are one to two broods per season with the clutch size being four to five eggs.

So there you have it: Sometimes the answer to success in the natural world isn’t specialisation and keeping your head down, but generalisation and getting on with others.