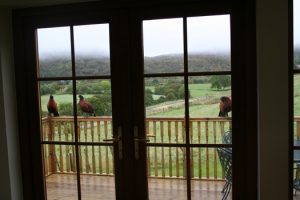 An influx of Chaffinches, Fieldfares and tame Pheasants by Roger Hughes

Here in east Sutherland in the north of Scotland, it’s been an unusually dry autumn with very little rain and none of the usual westerly gales. We’ve had a few cold spells with temperatures remaining freezing throughout the day, but right now it’s mild again. At the start of each of the cold spells I got an immediate influx of birds into my garden, with around 200 chaffinches alone trying to get onto the numerous hanging feeders. Good numbers of goldfinches, greenfinches, siskins and a few redpolls also join them, and because of the large numbers I also scatter scoops of sunflower hearts onto the ground so all the birds get a feed. This approach also attracts up to 10 blackbirds at any one time, and I’m confident that all or most of these are continental birds which arrive in the area from mainland Europe during October.

And talking of species of thrush which migrate to our shores for the winter, during a cold snap at the end of October we had a flock of perhaps 150 fieldfares and redwings descend on our garden and croft. This was especially pleasing, because six years ago I planted around 50 rowan trees and this year most were laden with berries – which was the simple reason for the presence of the fieldfares and redwings. It took them less than three days to strip the trees of berries, and once they had they were straight off to no doubt look for more elsewhere.

A little less welcome in our garden right now – including in the veg patch – are around a dozen tame pheasants, with these having been released along with hundreds of others by the local estate back in the late summer. Once the shooting season starts (which was a month or so back) the birds disperse from their central feeding points (the gamekeepers were then feeding them twice a day) and many end up in people’s gardens and usually below bird feeders, or just wandering around in the middle of the main road waiting to be run over. The birds are not only tame – some you could literally feed from your hand – but also naïve and largely unable to fend for themselves. In many ways it’s a pathetic sight and one which tugs at my emotions, and hence why I won’t see the birds go hungry and die as a result – which they would. Of course this behaviour is the consequence of rearing a non-native species of bird in captivity for sport and then releasing it in large numbers into, what must be for them, a very hostile environment. I don’t have a big issue with the killing bit – in fact in many ways it’s the best outcome for the birds – and there’s also a plus for our local economy (e.g. employment of gamekeepers) but there’s no real consideration given to the welfare of the birds once they disperse, or the damage to the local ecology (not to mention people’s gardens) which also happens as a result.

The picture above I took from my office window, and there’s no denying that a plus side to the annual pheasant invasion is the stunning plumage of the cock bird.

Our guest blogger from the Scottish Highlands, Roger Hughes is a long-time associate of Vine House Farm, and now lives in the north of Scotland and the beautiful county of Sutherland. Roger helps us with a range of business services, but he’s also a keen bird watcher, is very knowledgeable about feeding birds, is a general nature lover, and also partly earns his living from writing. He lives with his wife, Julie, and they have a small croft with a wide mix of habitats from wooded riverbank to meadow and moorland – all good for wildlife of course. So with all this in mind, Roger now writes a regular blog for the Vine House Farm website which we very much hope you’ll follow and enjoy.