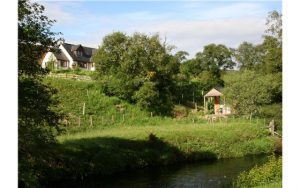 An unexpected flock of rock doves AND an otter

The photo shows my small bothy by the river Fleet, and this is where I write my occasional guest blog for Vine House Farm. In the background is our house, and the land to the left of both buildings is part of our croft. So fair to say that things could be worse, though the setting looked rather different this February morning with the landscape white from the previous night’s sharp frost.

My day usually starts with letting the chickens out, then a quick check to make sure my wife’s ponies are okay in their stables, then I fill-up any near-empty bird feeders (we go through around 20 kg of sunflower hearts a week alone in the winter months), and finally I throw a large scoop of mixed grain and seed onto the drive for the waiting semi-tame pheasants, before heading back indoors and the first black coffee of the morning. The pheasants? Well they’re the survivors of captive-reared birds that the local sporting estate release late summer each year, and they’ve survived because either they’ve been lucky enough to avoid being shot, or they’ve found sufficient food in people’s gardens and haven’t starved to death in the cold winter months. And most probably would starve because in the absence of a human putting out food for them – gamekeeper or kind homeowner – they struggle to find their own way (their behaviour is very different to wild pheasants and they really don’t have much of a clue of how to fend for themselves).

Anyway, back in the kitchen and with a glance outside to see how many pheasants were there, I was astonished to see no less than 13 rock doves frantically feeding with them. This was a first, as although I’ve occasionally seen this rather shy species locally and mainly at a disused quarry a few miles away where they breed, they’d never landed in our garden before. But the morning got better. . . I headed down to my river bothy with laptop, flask of coffee and bacon sandwich in hand, and on arrival saw some movement on the river right in front of me. And there it was: a beautiful otter making its way upstream and hunting on the way. This was a rare sight indeed, and only the second time I’d seen an otter on our stretch of river in the six and a half years we’ve lived here. And up until the rock doves and then seeing the otter, I had no idea what I was going to write about other than the pheasants, but I did know that something was bound to happen to give me more material, because it nearly always does in our wonderful part of the world.