Throughout the UK with the exception of the Shetland Isles.

It’s probably fair to say that the Dunnock is the most overlooked of all garden birds, and even has to suffer the indignation of also being called a Hedge Sparrow – when in fact it isn’t related to sparrows at all and is in a family of birds called Accentors. Both male and female Dunnocks are alike in their grey and brown plumage, but the younger birds tend to be more brown and striped. They can also be identified by their thin bill and orange legs. A very common garden bird, they’re normally seen individually or in pairs and feeding on the ground, or close to it in undergrowth.

What sound does a Dunnock make?

Dunnocks feed on both small insects and small seeds, plus spiders and small worms. In the winter months the food becomes largely seeds, and for this reason the species is very easy to attract to feeding areas. There are two key aspects to this however: Firstly, the food needs to be on the ground or a ground feeder tray, and a secondly the seed or other foods needs to be small. For example, Dunnocks will manage a whole sunflower heart, but a husk free mix which includes peanut chips and small seeds such as canary seed is more ideal. Our Premium High Energy Mix would certainly be suitable.

What should I feed Dunnocks?

We recommend the following products to not only attract more Dunnock s your garden, but also ensure you are meeting their optimal dietary requirements. 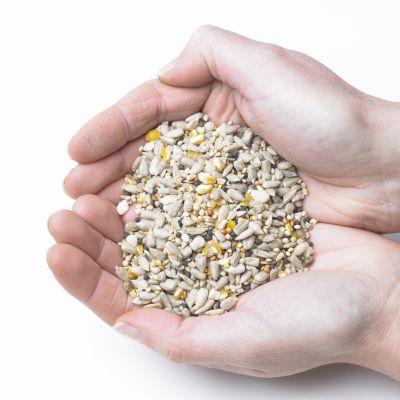 The nest is usually well hidden in fairly dense cover such as a shrub or hedge. It is a deep cup of plant stems, twigs, grasses and other general plant material, then lined with moss and hair etc. Sometimes the old nests of other birds are used and adapted. The female alone constructs the nest and also incubates the eggs, though both sexes feed the young birds. Two to three broods are typical with the clutch size being 4-5 eggs. Dunnocks are unusual in their breeding behaviour in that male birds may have two females, plus other scenarios occur where two males and two females may, effectively, form one breeding pair.

Dunnocks are usually seen on the ground or close to it in vegetation, and shuffling along with rather animated and nervous movements. They have a tendency to avoid open areas and like to stay relatively close to cover. However, the song – which is a rather high pitched and short burst of somewhat tuneless notes – is often delivered from an exposed perch.

Overall, there has been a moderate decline in numbers over many decades, with a more sharp decline happening between the mid-1970s and 80s. However, there has been something of a recovery in the last 20 years or so but the species remains amber listed.