Fairly widespread across the UK where there is suitable habitat, but largely absent from the Outer Hebrides, Orkney and Shetland. In the Scottish Highlands mainly only as a summer breeding species.

The Yellowhammer is a bird of open country with scattered bushes and hedgerows. Heathland and non-intensive farmland are the ideal habitats.

Although not a common garden bird, Yellowhammers will, locally, visit relatively open gardens and often when close to farmland with hedgerows. The male bird is unmistakable with its bright yellow head and yellow underparts (the yellow is much less pronounced outside of the breeding season), streaked brown and black back, and white outer tail feathers which are obvious in flight. The female lacks the bright yellow colour of the male, though has a similar plumage pattern overall.

What sound does a Yellowhammer make?

The diet of the Yellowhammer is rather varied, and consists of seeds, grain, some small fruits such as blackberries, insects and spiders. In the garden, Yellowhammers will feed on the ground or a ground table, with Premium Finch Mix being an ideal food.

What should I feed Yellowhammers?

We recommend the following products to not only attract more Yellowhammers your garden, but also ensure you are meeting their optimal dietary requirements. 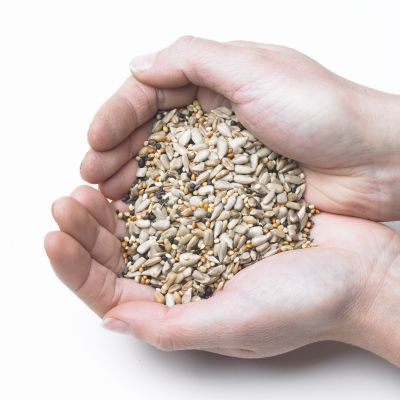 The Yellowhammer typically builds its nest on or very near the ground, and in a tuft of vegetation or close to, or just in, a bush or hedgerow. The nest is a cup of grass, plant stems, then lined with fine plant material or hair. There are two, sometimes three, broods per season, with 3-4 eggs in each clutch which the female incubates alone and fed by the male bird. Both parents feed the young.

Probably the most notable behaviour of the Yellowhammer is its habit of perching on an exposed branch on a bush or in a hedgerow, and repeating its distinctive short song.

A rapid decline in the population of the Yellowhammer has taken place since the mid-1980s. However, there has not been a uniform pattern across the UK for this decline, with the population actually increasing in Scotland over the last 10 years or so. As is the case for so many of our songbirds, modern farming practices are likely to be partly responsible for the Yellowhammer’s population decline