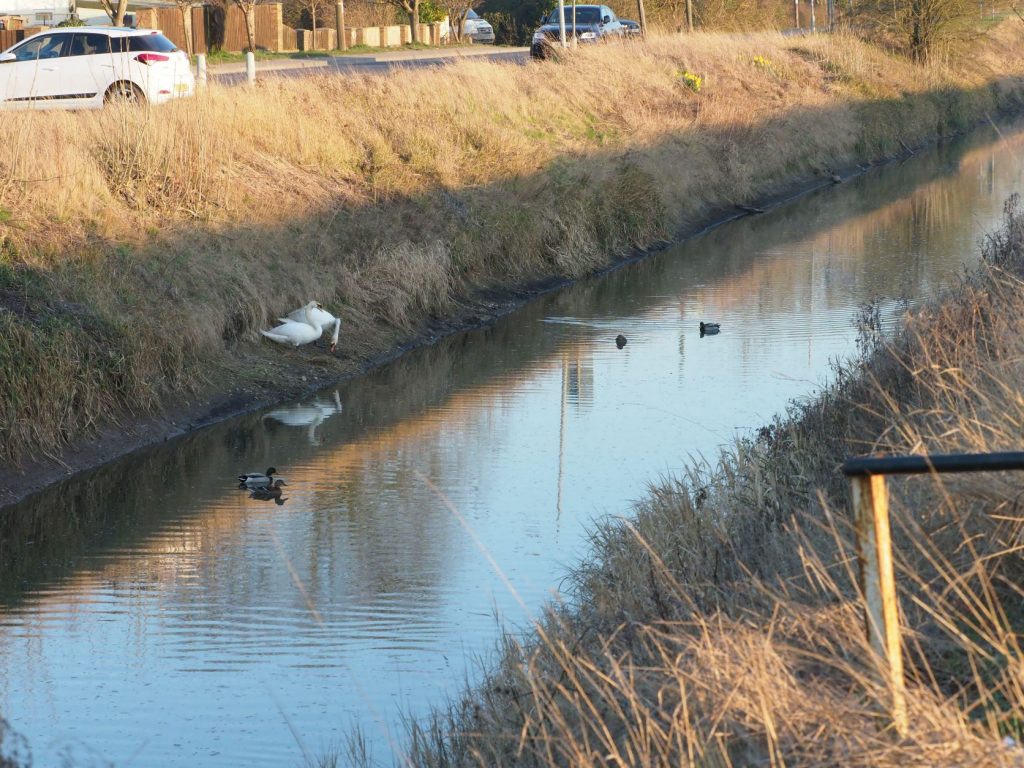 The species that nest in our drains and their lifestyles are described below:

This is the bird that drainage boards are most likely to get in trouble with for destroying nests. They sing for most of the summer and so people know they are present in our reed fringed drains. Reed Warblers only weigh about 15g but they fly across the Sahara desert to winter about 10°N of the Equator. They arrive back in England during the first two weeks of May to breed in reedbeds and our reed fringed drains. The growing reeds are far more flexible than the previous reed stems, so they like to attach their nest to some of the previous year's reeds, two or three feet above the water. By cutting a drain only one side each year you are providing good nesting habitat for Reed Warblers. They are double brooded; the first nest will be built in early June and the second nest built in the second half of July. Four eggs are a normal clutch, which hatch after being sat on for about 12 days and the young are in the nest for 11-12 days. They have normally finished nesting by the middle of August and will spend the next few weeks in the reeds growing and fattening for their long journey south.

Sedge Warblers are about the same size as a Reed Warbler, and they migrate to warmer climes in the winter but stay in North Africa. They arrive with us in April, starting to nest in the second half of May, laying five or six eggs, and the second clutch is normally finished by the end of July. They prefer to nest in more tangled vegetation than Reed Warblers - a drain or dyke that hasn’t been mown for several years with second- or third-year reeds, and ideally with a few brambles growing in it.

Reed Buntings are resident in the British Isles, they can be seen singing from the top of bushes or reeds with their black heads from early April. Like other Buntings, they don’t help their partners very much in raising their families, they seem to need to keep singing most of the summer to protect their territory. Like the Sedge Warblers, they need tangled vegetation to nest in, again they are double brooded, the first brood starts in early May and the second brood is finished by the end of July.

Mallard are one of our earliest nesting birds, they normally start nesting in February.  They rely on last year’s unmown vegetation to hide themselves and their nests. They will nest up to 200m away from water, so they don’t have to rely on vegetation on drain sides to hide their nest. The ducklings rely on insects and so those early broods will often fail because of a lack of insects. They will continue to nest right up to July or August if they fail to rear young.

A bird that used to be seen on every pond and watercourse, the Moorhen like to build their nest in reeds or brambles over the water away from foxes, stoats, and weasels. Those places are not available in well-managed IDB drains, so they must nest in the drain sides in last year’s vegetation. As they can’t nest until they find a suitably hidden site, it may be that they have declined because in many places, this would mean they wouldn’t be able to nest until June or July. In good habitat, they will start to nest in March. They have been in steady decline for the last 50 years, partly because of loss of habitat and more recently because there are more crows and magpies around that would take their eggs.

Only nesting on our larger watercourses, Coots, like the Moorhens, prefer to build their nest in vegetation over water. They are more likely to be found on drains or rivers controlled by the EA where the vegetation is not normally cut. If there is plenty of food around, they will start nesting in March and continue to produce broods right through the summer. They have also declined over the years because of loss of habitat and because of the increase of carrion crows, which take their eggs.