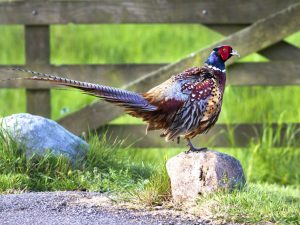 Midwinter in Devon by Andrew Cooper

Midwinter, even here in normally sunny South Devon, the occasional cold snap can bring us ice and snow. The biggest danger for wildlife at this time of the year is not so much cold as simply finding enough food. Some birds are smarter than others. And some, quite simply more attractive. Who can fail to be impressed by the robin's boldness and beautiful red breast. The delicate hues of the blue tit or eye catching colour patterns of the redwing?
Several years ago I produced a major BBC television series featuring the wildlife of Britain from a different angle. These creatures lived in landscapes heavily managed by people. Among the most scenic were large private estates, often open parkland and farms with magnificent specimen trees. Landscaped by some of the biggest names in the business, they were carefully managed to favour the most important sources of meat before the days of supermarkets. The Secret Nature of Wild Game featured deer parks and various game birds.  Many of these animals were introduced to Britain. The most spectacular was undoubtedly the pheasant. Brought in from the far east, exotic and self assured, they appeared to be a large showy bird more beautiful than big brained. Or so I thought. It turned out that a small percentage of pheasants learnt to survive the winter shoots by staying on the ground. While most birds were flushed by lines of beaters walking through woods and cover crops, some pheasants ran back between their legs. These birds are the survivors now living wild in the British countryside.
It is with great pleasure that we attract wild birds to our gardens.  The clever ones have learnt that people are a good source of food. Especially when the birds make themselves obvious. But when tits twitter around the bird table, robins come conspicuously close to windows and pheasants crow loudly, I am now not sure who is training who!
Andrew Cooper
Guest Blogger