Migrant birds are leaving and arriving on our shores this week

The middle of April is an important time for migrant birds, plus also a fascinating one as it represents a short spell when the species which have been with us all winter and are yet to depart for the countries they breed in, can actually still be present at the time other species are returning from Africa to breed here in the UK. For example, you could see a Brambling before it heads back to Scandinavia on the same day you see a Grasshopper Warbler returning from Africa. And of course, each of these species may briefly also have the very unfamiliar sight of each other! 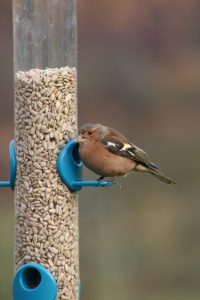 Chaffinch numbers increase in the UK during the autumn months and into the winter, as birds from the continent come here for our relatively mild climate

There are actually far more species of purely migrant songbirds which arrive in the UK in spring to breed, than there are species which have wintered here and breed further north in Europe. However, what skews the numbers a bit is that some of our common garden songbirds such as Blackbird, Chaffinch and Robin, have their numbers swollen in the winter months because many arrive from the continent to winter here. So the flock of Chaffinches you’ve been feeding all winter in your garden might actually now be returning across the North Sea to Norway, Sweden or even further east into Russia – or at least some of them might as the picture is further confused when flocks from overseas mix with those of the same species that breed in the UK!

Songbirds which migrate to the UK to winter here

Of the songbird species which don’t breed in the UK and are now returning to their northern breeding grounds, the main ones are Brambling, Redwing, Fieldfare (though a handful do breed in a few specific locations in the UK) and Waxwing. Now compare this number to the approximate 25 plus species of songbird and other species such as the Cuckoo which migrate to the UK to breed each spring, and you’ll get an idea of the difference.

The first of the migrant birds to arrive in Spring

Of course some species of migrant bird are very much synonymous with the start of Spring, with the first sight of a Swallow effortlessly rising in flight to clear a hedgerow, to the iconic call of a Cuckoo as it looks to find mate, being two of the best examples.

And the first and last to arrive? Well Chiffchaffs are often the first, with this small and rather indistinct warbler making its presence quickly known with a song which its name derives from: ‘chiff chaff, chiff chaff’ and so on. And the last is generally the Spotted Flycatcher, whose arrival is well into May with any of this species never seen before the last few days of April.

If you’re not familiar with some of the birds discussed here, then why not get a handbook which will allow you to identify them. Or, for children, perhaps an identification chart or a sticker book. You’ll find all of these products on this page.