Not forgetting the common guys

Living where I do in Sutherland, the north of Scotland, it’s easy to focus on the more exciting species of birds. For example, my modest 7 acres of croft land includes about a quarter of a mile or river bank (River Fleet) and this breeding season it’s hosted Common Sandpiper (actually not that ‘common’), Dipper and Goosander. All species which tend to make my pulse quicken through excitement as I inevitably startle them as I walk past – normally as I lead one of my wife’s ponies into an adjacent meadow. And then when I get to the meadow it’s a pair of Oystercatchers which takes to the air and noisily circle above me, and all in the name of protecting their chicks hidden somewhere in the short vegetation. 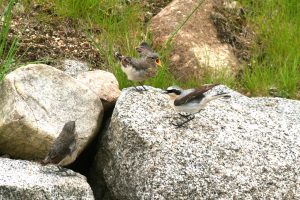 A few years back I also enjoyed the outstanding privilege of having a pair of Wheatears successfully breed under some rocks right outside my office window - the photo above I took from inside my office just a few metres away. And just a few days ago I was walking in the hills close to my house and watching Golden Plovers protect their young.
But although all of the above is part of the joy of living in such a beautiful and relatively wildlife-rich part of the world, if I were to properly measure the breeding success of the birds I mention it would involve countless hours of painstaking work. And I don’t have countless hours to spare.
So what I do instead is a snapshot survey of the common species that most of us have in our gardens, such as Robins, Blackbirds and the too-often-ignored Dunnock. And I’m happy to report that numbers are well up on the year, with around a 100% improvement on last year and probably double that compared to the year before. The reasons? Well the last winter was very mild compared to the previous three, and in fact we only had one short spell of snow which was in the November. So this meant that more resident song birds will have made it through the winter to breed, with this further boosted by a mild spring and little severe weather to hinder breeding success.
There’s a related point to this story which I’m keen to share: When I’m out on the hills or wooded glens and looking for the rarer species we have in the northern Highlands, what often actually makes my day is coming across a common garden species in the most remote and inhospitable location – so the sort of species I count in my annual snapshot survey. I think the Wren is the bird which holds the accolade for turning up in the least expected location, and just a small area of utterly windswept dwarf willow a 1000ft up the side of a hill is very occasionally the place they call home. So yes a Golden Plover is a wonderful sight on a baron moor, but the Wren which also ekes out a living in the same place is still a joy to see.
Our monthly columnist from the Scottish Highlands
A long-time associate of Vine House Farm is Roger Hughes, who now lives in the north of Scotland and the beautiful county of Sutherland. Roger helps us with a range of business services, but he’s also a keen bird watcher, is very knowledgeable about feeding birds, is a general nature lover, and also partly earns his living from writing. He lives with his wife, Julie, and they have a small croft with a wide mix of habitats from wooded riverbank to meadow and moorland – all good for wildlife of course. So with all this in mind, Roger now writes a monthly column for the Vine House Farm website which we very much hope you’ll follow and enjoy.