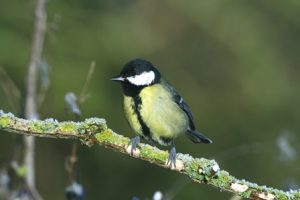 You may or may not have seen it in the news recently, but there was a great piece published by the BBC which outlined the results of a study carried out by scientists on the length of great tit bill size.

What the study essentially showed, is that, over the last 40 years or so, great tits in the UK have evolved slightly longer bills compared to their counterparts in mainland Europe. The difference in size was now 0.3mm, which might not sound very much but it is when you consider how small a bill is anyway on such a little songbird. This has resulted in increased breeding success and with this a corresponding increase in the size of the great tit population – which is great news of course!

Why has this occurred?

Well whilst the study wasn’t unequivocal about the reason, the only logical answer put forward was that the birds had taken advantage of food put out for them in gardens – which is considerably more in the UK compared to the Netherlands where the bill size of great tits was also monitored.

As Dr Lewis Spurgin of the University of East Anglia explained: "It's certainly true that birds who have adapted to better access food will be in better condition generally, and so better able to reproduce and outperform others without that adaptation." He added: "Although we can't say definitively that bird feeders are responsible, it seems reasonable to suggest that the longer beaks amongst British great tits may have evolved as a response to this supplementary feeding."

From our point of view and no doubt anyone used to seeing great tits feed in their gardens, this all makes sense of course: Be it chiselling at peanuts in a mesh feeder, breaking open a black sunflower seed when holding it on a branch, or accessing a suet block set back in a hanging cage, a marginally longer bill is going to be a slightly more efficient and quick way of getting nutritious food. We often think about evolution taking place over millennia, but it just shows that, with some possible human intervention for once, it can happen in the matter of decades.

Of course, few people reading this will need further convincing about the value of feeding birds in their gardens, but none the less it’s obviously great when scientists agree once again.

The great tit study was carried out by researchers at Sheffield University, Oxford University, the University of East Anglia, and the Netherlands Institute of Ecology.