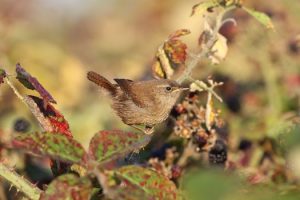 The bold and highly vocal Wren

As we continue our series of blogs where we look at a specific species of garden bird, this time it’s about the bold, highly vocal and very popular Wren.

Perhaps the most surprising fact about the Wren is that it’s the most common bird in the UK, and therefore the most numerous. There are estimated to be around 8.5 million breeding pairs of Wren in the UK, which far outweighs both House Sparrow and Wood Pigeon – species which are offered presumed to be the most numerous – both of which have populations of about 5.3 million.

What makes the Wren’s population statistic so surprising to many people, is that this is a bird which, often at best, they have an infrequent glance of on a prominent perch in their garden – and probably singing its head off – before a blur of tiny wings takes its small and dumpy body back into thick cover.

So how can it be that the wren is actually so common? The answer lies in its unrivalled ability to exist and breed in so many highly varied habitats, with these including hedgerows, woodland (deciduous, coniferous and mixed), parks, gardens, moorland, wasteland, rocky coastline (including remote islands), and marshland with reeds and thickets. The common factor is that in all habitats it has to have a degree of cover to hide, breed, and hunt for invertebrates.

Another fact which makes the Wren such a special bird is its nest and breeding behaviour. The nest is a delicate dome structure consisting of moss, plant materials, lichen, leaves and feathers, and located in a hollow or crevice in a tree, wall, bank or rock face, or behind climbing plants such as ivy. Given its choice of nesting location and also how it disappears into small openings in search of food, It’s easy to understand where the Wren’s Latin name of Troglodytes troglodytes comes from.

The male builds the main structure of the nest with the female then lining it with feathers, though the male will build several nests with the female then choosing the right one. However, more than one of the nests the male builds may be taken by females, as Wrens are polygamous (though more so in the south of the UK than extreme north) and therefore the male bird may mate with several females – all of which can go on to successfully have young. Incubation is by the female only of the 5-6 eggs, with two broods per season normal. Both parents feed the young, which means a male bird with multiple nests can be kept very busy!

Wrens are highly susceptible to very cold conditions, and in prolonged spells of low temperatures they suffer a high level of fatality. The population bounces back and usually in a season or two, because their brood size is relatively high with up to 6 eggs, and often two broods per season. But in an effort to get through those very cold winter nights – when a Wren can lose up to 10% of its body weight as it uses up energy in order to keep warm – this otherwise antisocial bird switches behaviour as night falls from defending a territory, and instead joins more of its species to huddle together in suitable roost site – perhaps a hole in a tree or nest box. In fact, there's a record from Norfolk of 61 Wrens roosting together in just one nest box!

And then there’s the Wren’s song, which is unusually loud – especially considering how small the bird is – and consists of a musical rattling and softer warbles, and usually blasted out from a prominent perch.  It’s a fantastic song, and the usual giveaway that this much-loved bird is close-by.

Wrens are not an easy species to attract with food in the garden, though in harsh winter weather they may occasionally be tempted with very small food pieces such as peanut granules or finely grated cheese. However, a far better tactic is creating habitat which will harbour natural invertebrates, with a large but loosely stacked pile of branches and twigs being ideal.