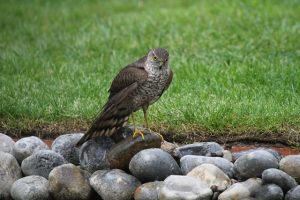 The privilege of sparrowhawks visiting our gardens

This might be one of the more controversial topics we’ve covered in our bird of the month series, as whilst many of you reading this will rejoice in the spectacle of a sparrowhawk arriving at high speed in your garden in the pursuit of prey and brilliantly dodging obstacles such as a rotary clothes line along the way, some of you will be less than enthused.

Of course the usual reason for the latter position, is that sparrowhawks kill and eat the very same songbirds we’re all feeding and, in so doing, trying to improve their breeding success. But sparrowhawks also need to feed and raise young to survive, and by feeding songbirds in our gardens we’ve simply created a concentration of prey for them. So in this respect it’s down to us, but rather than see that as a negative we should see it as a positive.

Sparrowhawks do not negatively impact on our national songbird populations

On the latter point, it’s important to understand that songbird fatality is anyway high, and hence why broods are typically large and, in some species, multiple per season. Taking the robin as an example, a pair would typically have two broods per season but may have three, with four to six young in each. So at the very maximum end of that scale, if all the young survived until the next breeding season and both adults did as well, then two birds in this species have suddenly become 20. This is a position which clearly wouldn’t be sustainable, as on a UK scale that equates to 6.7m pairs becoming 67m in one year !
What would happen in the absence of sparrowhawks, is that, on average (clearly there’d be fluctuations by year) we’d still have around two robins ready to breed next year, with the remaining birds, perhaps both adults and 16 of the young, dying through lack of food, a very cold spell of weather, disease, predation by cats, hitting a conservatory window etc. If sparrowhawks were living in the same area as our hypothetical pair of robins, then the averaged-out effect would simply be they were responsible for some of the fatalities instead of some of those listed – e.g. the sparrowhawk took a young robin weakened by disease or extreme cold.

For further context, we also need to remember that sparrowhawk numbers were decimated in the 50s and 60s due to DDT poisoning on farmland, with a recovery in numbers when the chemical was banned in the 80s. However, numbers of sparrowhawks are still not especially high, and indeed even by 1990 there were estimated to be only around breeding 32,000 pairs in the UK, with actually small declines recorded in some regions during the 90s and between 2005 and 2008.
So next time a sparrowhawk visits your garden, not only can you celebrate its arrival but also rest assured that it isn’t negatively impacting the numbers of songbirds you’re also attracting by feeding them.