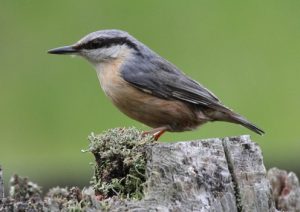 In the latest of our monthly series which looks at less well-known facts about a different species of garden bird, this time it’s the turn of the unquestionably special, albeit rather grumpy and aggressive, Nuthatch.

It will be fair to say that you’ll either live in an area where there’s currently a population of Nuthatches or you won’t – there really is no middle ground. The reason for this is that adult birds rarely venture out of their breeding and feeding territory, which they strenuously maintain throughout the year and including outside the breeding season. However, that doesn’t mean to say that if you don’t currently see Nuthatches in your garden you never will, as the species has bucked the more general trend of songbird decline, and has actually increased its population and range in the last few decades.

So how has the species achieved this extended range if adult birds rarely venture away from their home turf? It’s an interesting story but not one entirely understood just yet, though there is some fairly sound evidence which gives us a good idea of the reasons . . .

Because of the adult bird’s strong territorial instincts, juvenile birds are driven out of the territory after they’ve fledged. Assuming of course that there’s suitable habitat close-by – which needs to be mature deciduous or mixed deciduous and conifer woodland – then a young bird may well adopt it as its own territory (which is normally around one hectare in size). However, with an ever-increasing population and perhaps because of climate change meaning less severe winters and therefore more Nuthatches surviving to breed, an expansion of range has inevitably occurred. This expansion has seen the species extend its range right up into Cumbria and even southern Scotland since the 1970s.

So a rare and welcome success story, and probably one where the increased level of people feeding birds in their gardens has also helped – Nuthatches love peanuts and suet pellets in mesh feeders, and will also take sunflower hearts and black sunflower seeds which they’ll wedge into a tree crevice and hammer away at with their strong bills.

The behaviour of Nuthatches in the garden is often highly entertaining – albeit perhaps somewhat terrifying for some other songbirds. For a start they have the habit of moving head-first down a tree trunk – something no other bird in the UK does. But it’s their intolerance of, and aggression towards, other birds which can really make a visit to your feeding station a memorable one. So a few Greenfinches on a hanging feeder full of black sunflower seeds or a Great tit minding its own business on a peanut feeder, will all be swiftly despatched and with a degree of hostility that hardly seems warranted.

Nuthatches are colourful, characterful and stunning little birds, and it’s great news indeed that they’re bucking the trend and increasing their range and population.