It might be an ever-so slightly depressing thought, but there’s no getting away from the fact that the best of the summer weather is well behind us and the nights are starting to draw in. So with that in mind, there’s no better time to start thinking about the autumn months ahead and what this means to your garden birds.

The autumn months can be times of plenty for some species of song bird, with an abundance of fruit and berries on trees and shrubs, plus seeds on wild flowers. Of course it isn’t quite as simple as that, because in some areas of the UK – in particular urban areas – there will be far less natural food available. Added to which, the competition for available natural food actually increases with an influx of birds from mainland Europe, Scandinavia and even as far away as Siberia. These birds can broadly be split into two groups:

The bird species that migrate to the UK for winter

Firstly, there are those rather special species which don’t breed in the UK, and these are Brambling, Redwing, Fieldfare and Waxwing. The second group are actually many of the common species we know and enjoy in our gardens all of the year, including the Robin, Blackbird, Chaffinch and Starling. So all of these species, and more, flood into the UK each autumn for the simple fact that our winter is a lot less harsher than the areas they’ve spent their spring and summer in. (Though, and certainly for our last winter in the UK, some birds which made the journey might have been questioning their own judgment on that one…) So if you’ve ever wondered why that solitary pair of Blackbirds you’ve been watching in your garden over the summer months is suddenly joined by three or four others and each getting grumpy when their personal space is encroached on by another, then that’s the reason. 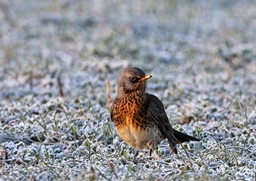 So yes there will be at least some natural food for your resident garden birds, their cousins joining them from the continent, plus the special species such as Brambling, but it certainly won’t last and, anyway, there’s now the extra enjoyment to be had from feeding those birds that have made such a long journey to be in your garden.

Interestingly, the behaviour of Blackbirds and Robins which come from the continent can be slightly different to residents of the same species, with shyness being the obvious example – so that’s often a good way to tell residents and migrants apart. More interestingly, this difference in behaviour isn’t as a result of their migration, but actually how birds from the same species have evolved slightly differently on different land masses. But anyway, this shyness doesn’t extend to not eating the food you put out for them, though it might mean you’re not able to get quite as close to watch them.

The different feeders and foods for winter bird feeding

As for your feeding regime, if you’re already putting out a good selection of foods including seed mixes, sunflower hearts, niger seed and suet products, then there’s no need to change this. However and as the months progress and we get nearer to the winter, increasing the quantity of food obviously makes sense. But the main thing to really think about is whether the way you feed the birds in your garden is going to provide a source of food for both the resident species and the influx joining them from the continent. Hanging feeders will be fine for tits and finches (though Chaffinches and Bramblings both prefer to feed on the ground), but for Blackbirds and Robins, for example, they’ll want to feed on the ground or a table. So if you don’t have one already, then a ground feeding tray is ideal and will allow for all species of bird to feed.  It’s also worth remembering that softbill species like Robin, Blackbird and Song Thrush, can’t crack the husk off seeds, so be sure to provide foods such as sunflower hearts rather than black sunflower seeds in the ground feeding tray. Suet pellets are also ideal.

So look out for those winter migrants as they start to arrive later in September and into October, and do let us know how you get on with feeding them in your garden.