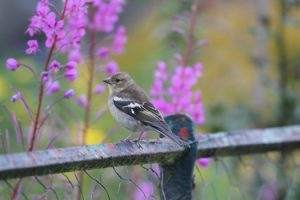 Whether or not certain species will ever visit your garden

There are a number of bird species which are almost guaranteed to be visitors to gardens right across the UK, and regardless of whether you live in a town, city, rural village or the back of beyond in the north of Scotland. These species would almost certainly include the robin, blackbird, dunnock and wren – indeed, the wren is the most widespread bird on our islands.

But over and above this small number of species, the factors which determine which birds we can attract to our gardens are generally about a) where we live in the UK, and b) the sort of habitat around us.

On the latter and for example, here in the garden at Vine House Farm we do, not surprisingly, largely attract farmland birds. Yes there are some woodland species such as blue tit, but only really because of the woodland we’ve planted close-by – the Fenland around us is pretty-much devoid of native woodland. But for those of you living in areas with more woodland around you, species such as great spotted woodpecker may be a daily visitor – and even if you live in an urban area. Indeed, it’s a bit of a myth that living in the countryside will necessarily mean more birds as, for example, areas with intensive farming will have far less birds than a city conurbation rich in parkland, gardens with trees, railway embankments and wasteland etc.

Where you live in the UK is a factor for whether or not certain species will ever visit your garden. So taking the nuthatch as an example, populations are strongest in southern and central England and wooded parts of Wales. There are some breeding pairs in the south of Scotland, but none north of there and also none in Northern Ireland. And that position isn’t likely to change, as breeding populations are very localised, with a nuthatch reared in a particular area of woodland unlikely to ever venture far from it in their lifetime.

In contrast to the nuthatch though, we have the siskin and here is a third reason why we may be able to attract certain birds to our gardens (and aside from migrants of course): the nomadic species. Siskins are a classic example of nomadic behaviour, because although some do migrate, most in the UK simply move around outside of the breeding season to where food is available – which is also very much weather dependent. For example, a harsh winter in the north of the UK is likely to mean more siskins turning up in the south of England looking for food.

And having suitable food in your garden is of course the key the attracting any bird, be it one which spends its life in the local vicinity or has travelled hundreds of miles in the search of a meal.