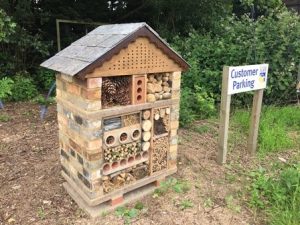 Thankfully spring isn't that far away. Warmer weather and more daylight will herald the return of migrant birds and the start of the breeding season of our resident birds. Sadly for many like the returning swifts, the return to their regular nesting spot doesn't always end well. Nesting spots could well have vanished along with the buildings themselves. These sites having been bulldozed or simply renovated at the expense of the nest site. Between 1995 and 2018, numbers have fallen by something like 58%

It isn't just the lack of nesting opportunities that has caused this; the lack of food in the form of flying insects has also had a detrimental effect on numbers.

But although it isn't quick or easy to boost the numbers of insects on offer, it is relatively easy to provide nesting opportunities for most birds, be they, residents or migrants. Thankfully it would seem a number of builders and local authorities have acted to help boost the number of nest sites. It has been reported that Brighton and Hove now have new planning laws to require developers to install bricks for bees and swifts in building over 5 metres high. In London, Hackney council also requires new builds to include swift bricks. For some time now, Barratt Homes have been installing swift nest bricks in developments, and the hope is that more developers will follow suit.

Bees haven't been left out as they, too, have been included within a number of these plans with the installation of bee bricks. These purpose-built homes provide, when coupled with pollinator-friendly planting close by, make ideal locations for bees. It is almost all that is needed to encourage them back into areas they may well have left some time ago.

Thankfully the government has set out biodiversity net gain proposals with the intention of ensuring that developments have more natural spaces for wildlife. But we don't have to wait or rely on rules imposed by central or local government. We can do our bit now, especially when migrants are already looking to return to our shores.

Many birds will be a little reluctant to take up residence in a brand new nest box, but after it has weathered in, they will often give it serious consideration. So the sooner you can install one, the better. And don't be put off by thinking, 'what difference does it make if I put up a nest box?' Every box has the potential to make a difference. Just look at the story of John Stimpson, who, over the past 13 years, has made over 30,000 nest boxes for swifts. It is thought that he has provided homes for half of the UK's breeding population of swifts.

His remarkable story only goes to prove how valuable it is and how every one of us can make a difference. We can't all build nest boxes, and we can't all house half the population of any bird species, but if we all do something, the combined result can be significant. I'd like to bet Mr Stimpson never expected to achieve his goal of making that 30,000 boxes when he started out! However much he wanted to.