Chaffinches are adaptable to different habitats, which include woodland, edges of commercial conifer plantations, hedgerows and gardens.

6,200,000 breeding pairs, with this number greatly increasing in the winter months as birds migrate into the UK from mainland Europe.

The Chaffinch is the second most common breeding bird in the UK, and also one of the tamest. Indeed, when fed regularly in gardens this colourful finch will come incredibly close to humans, and to the point they can, sometimes, be fed from the hand. The male bird dons spectacular coloured plumage in comparison to the much drabber female bird, with the male’s colours becoming even more pronounced as the breeding season approaches, then losing some of the lustre after it finishes. The species is very easy to attract to gardens and eats a wide range of foods, though tends to prefer feeding on the ground or table rather than hanging feeders, though will use feeders with circular perches (they find straight perches difficult to balance on).

The diet is very varied and this no doubt has a bearing on the success and widespread distribution of the species. Natural foods include seeds, fruit, buds and shoots, plus insects, spiders, earthworms and snails eggs. This adaptability also extends to foods put out for them in the garden, and they will eat everything from chopped peanuts to sunflower hearts, and any of our seed mixes to any of the suet products. However, they tend to be happier feeding on the ground, a ground table or normal bird table, but will use seed feeders and in particular if they have round perches.

What should I feed Chaffinches?

We recommend the following products to not only attract more Chaffinchs your garden, but also ensure you are meeting their optimal dietary requirements. 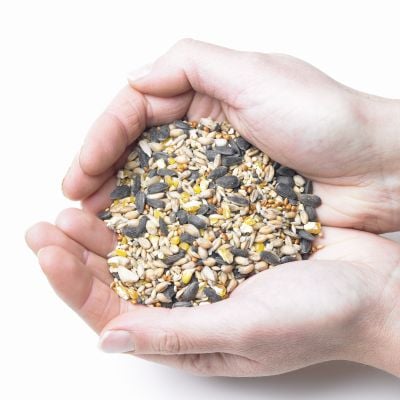 It is the female that builds the nest which is usually site in the fork of a small tree or in shrubbery, and is made from dry grasses, spiders’ webs and then covered in moss and lichen to blend in with the area and therefore is more camouflaged. The female alone incubates the eggs, though both parents feed the young. There are one to two broods with the clutch size being 4-5.

Chaffinches are highly social and gregarious, and will not only flock as a single species but also with others and, notably, Bramblings in the winter months. Interestingly though, they also have a tendency to form largely single-sex flocks. Another notable behaviour is their tameness, and long with this becoming a trait with regular garden feeding it can also be seen around car parks, outdoor cafes and picnic areas.

Numbers increased considerably from the 1970s to around 2005, though the population then took a fairly major hit with the outbreak of trichomonosis (which especially affects Chaffinches and Greenfinches). Overall though, the population is strong and slightly up on historic records. This positive trend is partly attributed to the species’ adaptability to different habitats relative to other species.