Widespread across the UK except the far north of Scotland, Western and Northern Isles.

The main requirement is mature trees and in particular broadleaf. Therefore woodland is the principles habitat, but areas such as parkland and farmland if there are enough mature trees in copses and hedgerows, plus large gardens will also support breeding pairs. The species is also present in mature areas of commercial conifer plantation, and especially where there are some dead trees and clearer areas due to windblown fallen trees.

There is huge disparity in the reported numbers of breeding pairs, with the RSPB stating 140,000 and the BTO a figure of between 25,000 and 30,000. We think the latter is more likely to be accurate.

Of all the birds which visit our gardens, the Great Spotted Woodpecker is arguably the most striking. It is a highly distinct species, with largely black and white plumage and a red patch under the tail, the male also has a red patch at the back of his head, while the female has a black nape. Younger birds have a red crown. This species is also fairly easy to identify in flight, with the motion being undulating and with the wings entirely folded back on the downward part of the undulation.

The Great Spotted Woodpecker’s primary food is wood-boring insects, larvae, spider, seeds and nuts. In gardens, the species is relatively easily attracted by peanuts in mesh hanging feeders, suet blocks and suet balls in cages, and will even cling precariously onto hanging tube feeders to get at sunflower hearts.

What should I feed Great Spotted Woodpeckers?

We recommend the following products to not only attract more Great Spotted Woodpeckers your garden, but also ensure you are meeting their optimal dietary requirements. 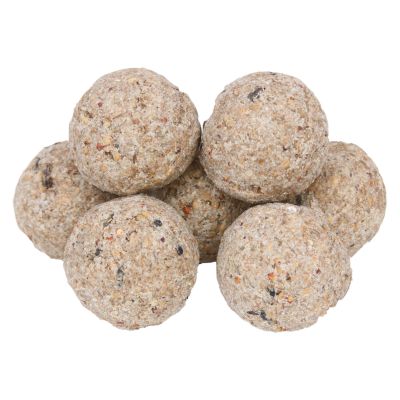 The nest is in an excavated hole in a tree, which may be a rotting tree or sound, and usually at least two metres above the ground. Both sexes excavate the hole though no actual nest is built inside it. The female bird does most of the incubation, with both parents bringing food to the young. There is just one brood per year with a clutch size of between five and seven eggs.

This is a very interesting species to observe and in a number of ways. When approached, and if on a trunk or branch, the bird will often move to the back so it cannot be seen – and repeatedly does so if the person follows its movement around. To extract seeds from pine cones, the bird will wedge the cone into a crevice on a tree in order to chisel out the seeds. Drumming on trees is perhaps the behaviour most associated with the species, with the sound being audible for up to 400 metres away. Watching the Great Spotted Woodpecker drumming, or indeed hammering its bill into a trunk to excavate a nesting hole or to get at wood-boring insects and their larvae, you’d think it would be highly damaging to the bird – if, hypothetically, a human tried it they would get instant concussion if the same level of force were used. But the species has evolved extraordinary shock-absorbing mechanisms within its skull to ensure its brain is unaffected by the impacts.

The long term population trend has been one of rapid increase since the 1970s. In particular this was noticeable in England, with Dutch Elm Disease being a key reason initially as it provided a huge increase in dead and dying wood which, in turn, provided more food in the form of wood-boring insects. In addition, it is thought that the provision of more food put out in gardens has probably increased winter survival rates.