The species has suffered a huge decline in its population and range in recent decades, and is now found only in some parts of England, and in particular the Midlands and southern and eastern counties. There’s a small population in some areas of southern Scotland and Northern Ireland.

Habitat is generally open with scattered trees, or on the edges of woodland or copses. Hedgerows on farmland are also a good habitat, and especially where there are mature trees for nesting in. Parks and gardens can also provide suitable habitat.

Slightly smaller than a House Sparrow and also less associated with human habitation, the Tree Sparrow is a bird of woodland edges and hedgerows. Along with its smaller size and generally different habitat, Trees Sparrows are easy to distinguish from House Sparrows by their black spot on each cheek. In addition, both sexes are virtually identical. In gardens but only in certain parts of the UK, Tree Sparrows can fairly easily be attracted to hanging tube seed feeders.

What sound does a Tree Sparrow make?

Seeds, grain, insects and insect larvae makes up the main diet, with much of this food taken on or near the ground. Despite this, Tree Sparrows will readily come onto hanging seed feeders, and have a particular liking for red millet.

What should I feed Tree Sparrows?

We recommend the following products to not only attract more Tree Sparrows your garden, but also ensure you are meeting their optimal dietary requirements. 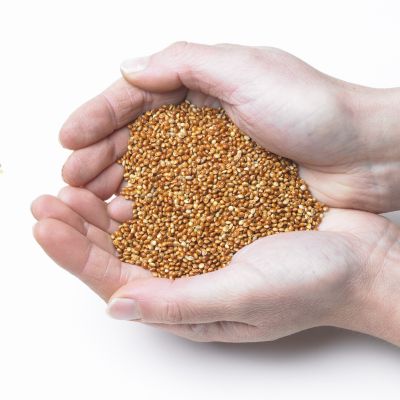 Tree Sparrows, as the name suggests, nest in holes in trees. They’ll also use holes in walls and banks, and there are records of them occupying holes within Sand Martin colonies. Nest boxes will also be used, with the ideal hole size being 28mm (locate the box out of direct sunlight and about 2 metres off the ground). The nest is a rather untidy structure consisting of twigs and plant stems, and lined with feathers or other soft material which is available. Two to three broods are normal with 5-6 eggs in each. Both sexes take part in the nest building, incubation and feeding the young birds.

A gregarious species and especially outside of the breeding season, in the winter months Tree Sparrows will often form fairly large flocks which may include House Sparrows and different species of finch. Historically, stubble fields were a key winter feeding ground and where the mixed flocks could be observed, with the loss of this habitat due to modern farming practices being a likely contributory factor in the species’ decline.

The trend for Tree Sparrows over the last forty years or so has been a very sad one, with a massive decline in numbers – albeit the population has gone through a small recovery since the mid-1990s. None the less, for every Tree Sparrow now there were probably 30 in the early 1970s.