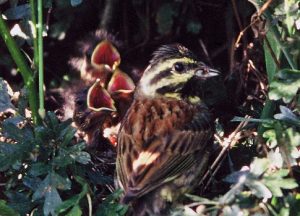 Down in the depths of Devon, less than 60 seconds away from the south coast as the peregrine flies, lives a rare little bird. Much of what we do on our farm is aimed at creating the best place for Cirl Buntings to feed and breed. Confined to a narrow coastal strip between Exeter and Plymouth they have some special needs. Just a decade ago these attractive little birds were critically endangered. Numbers had plummeted to an all time low. So a plan was launched to help them and other farmland birds. A plan that saw numbers rise dramatically.

Recently at Dartington Hall near Totnes, a special event celebrated 25 years for the Cirl Bunting. Defra's Countryside Steward Scheme recruited farmers to help. Organised by the RSPB with help from Paignton Zoo and the Devon Wildlife Trust, the scheme succeeded in bringing the Cirl Bunting back from the brink of oblivion in the UK. Quarter of a century ago barely 100 pairs were found in Devon. Now the latest census has discovered over a 1000 pairs. The celebration brought together representatives of the 200 farmers involved. Although the focus was on the bunting, other farmland creatures benefited hugely. The cause of the initial decline was discovered to be the lack of winter stubble, hay meadow and a place to nest. The stubble enables the birds to feed on the seed of arable weeds during winter and meadows provide the grasshoppers with which they feed their young. By encouraging farmers to sow Spring Barley, harvest hay from flower rich fields and provide healthy hedgerows, the Cirl Bunting flourished. In fact they did so well after a successful captive breeding programme that Devon recently exported some of the young birds to Cornwall. But my personal interest goes back even further.

25 years ago I filmed a BBC documentary featuring the plight of some of our rarest wildlife. The Cirl Bunting had never been filmed at the nest and would require a special license. Once granted I became the first to film the private life of one of our most beautiful small birds. At that time just finding a Cirl Bunting was a real challenge. Not that it is much easier now, numbers might have increased but they are still difficult to see, even here in South Devon, the capital of Cirl Bunting country. But with their population now rising that really is something to celebrate!

Andrew Cooper is the chairman of the Devon Wildlife Trust and a trustee of the charity that owns Paignton Zoo.