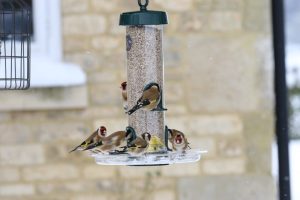 BTO confirms what we already believed: feeding the birds in your garden increases their numbers

Relatively small scale studies in recent decades have generally pointed towards a positive effect of feeding the birds in our gardens in terms of their numbers, but now a more comprehensive study carried out by the BTO (British Trust for Ornithology) has concluded that around 30 species have benefited since the 1970s.

The research was based on a very interesting approach, which essentially involved reviewing the advertising by bird food companies in the RSPB’s Birds magazine between 1973 and 2005, then aligning the extent of the advertising and growth in product choice with the BTO’s GBFS (garden bird feeding survey) data up to 2013. Ideally, the time period for the advertising data would have been longer and also gone up to 2013, but after 2005 the RSPB stopped bird food companies from advertising in its magazine in order to further its own bird food sales. In any event though, by 2005 the bird food market had fundamentally changed, with all the main foods available now largely also available then.

Key findings in the research reveal that back in the early 1970s just two species dominated garden feeders – house sparrow and starling – but four decades later around 30 species were regular visitors. Of note is the goldfinch, with fewer than 20% of the people involved in the GBFS survey in 1973 reporting the species, with this number jumping to 80% 40 years on. This change is very much aligned with choice and quality of the food provided, with niger seed and sunflower hearts being staple foods now, but which wouldn’t have been readily available at all in the early 70s.

At Vine House Farm we very much welcome this robust and highly relevant research, as not only does it confirm the basis what we’ve long said (in essence that feeding birds in gardens improves their breeding numbers), but also points to what could be achieved by positive human intervention to bird populations outside of gardens.

We say this because, clearly, virtually the whole of our UK landscape and its habitat has been shaped by man for its benefit. The way we farm here in the Lincolnshire Fens has also shaped our local landscape and the habitat within it, but not purely for the purpose of food production – we’ve long managed it with wildlife in mind. This work has also involved feeding wild birds – and on a very significant scale – but, and arguably more importantly, we’ve created habitat and farmed our land in a sympathetic way to ensure birds and other wildlife can thrive alongside our commercial farming business. And it’s this sort of approach that we’d like to see more farmers and landowners take, because if they did then we could see the same sort of benefit to bird numbers as we have from the commendable efforts of everyone who’s taken the trouble to feed the birds in their gardens.