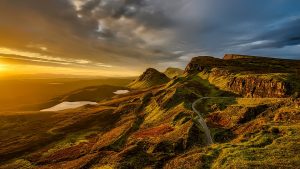 First Signs of Spring in the Scottish Highlands

When do the first signs of spring occur in Scotland?

For me, the very first sign of spring occurs on the 6th February every year – provided it isn’t cloudy. In fact, I can be even more precise than that because it’s actually at ten past two in the afternoon on that date, and this because direct sunlight briefly floods through our kitchen window for the first time in three months. But it is brief, because after just ten minutes or so the sun sinks back below the rugged hill line behind our house. The following day we get it for a bit longer, then, by the time we get to the third week of February, the fiery ball in the sky is with us for much of the day.

Living in the far north of Scotland and with a house and croft on a north-facing hill is the reason for our lack of direct sunlight for 12 weeks of the year, but we figure it’s a relatively small price to pay for otherwise living in such a beautiful location.

Benefits of a Mild Winter Leading into Spring

Like much of the UK, this winter has been exceptionally mild here and we’ve had very little snow and far fewer hard frosts than we have become accustomed to in recent years. However and unlike much of the UK, we’ve also had below average rainfall – though still more than enough it must be said. One consequence of this relatively mild winter is that a number of birds have started singing earlier in the season than they usually would – namely Mistle Thrush, Wren, Great Tit and Chaffinch – so this has further added to my sense ‘spring isn’t far away’.

The mild winter here has also helped the recovery in numbers of small songbirds such as the Wren, which had taken a real hit as a result of the previous four very cold winters. In fact, in the spring of 2012, I only heard one Wren singing anywhere within a few miles of my home, whereas this year there must be 6 or more. Robins and Dunnocks are also in better numbers this year, though both will have been affected less by previous harsh winters because, and unlike the Wren, will obviously readily take food put out for them. Wrens will, but only if that food is in the form of live mealworms!

My next job on the croft is to plant around 150 native trees, plus put up some Starling nest boxes to encourage more of this species onto the croft. In previous years just one pair has bred and these in an old and dying Downy Birch tree down by the river, so two or three next boxes in younger trees with no natural nesting holes should do the trick. And Starlings really deserve a bit of help, as at best they’re often overlooked and at worst discouraged from gardens. I think they’re a great little bird; entertaining, hard-working and actually rather attractive. So maybe worth thinking about a starling nest box in your garden, and there’s still time to get them up as Starlings typically don’t start as early as Tits and other nest box users in hunting out a suitable site.

A long-time associate of Vine House Farm is Roger Hughes, who now lives in the north of Scotland and the beautiful county of Sutherland. Roger helps us with a range of business services, but he’s also a keen bird watcher, is very knowledgeable about feeding birds, is a general nature lover, and also partly earns his living from writing. He lives with his wife, Julie, and they have a small croft with a wide mix of habitats from the wooded riverbank to meadow and moorland – all good for wildlife of course. So with all this in mind, Roger now writes a monthly blog for the Vine House Farm website which we very much hope you’ll follow and enjoy.