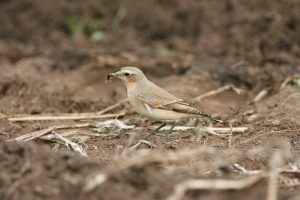 Although we’re barely into late March, the first of the summer migrants returning back to our shores are already here. The majority of birds which we won’t see for perhaps another month or more, will have already started their long journeys back from locations as far away as South Africa.

The species which normally arrives first is the Wheatear, with some of them even reaching our shores during late February. This charismatic little bird with its distinctive white rump, will have spent the winter in tropical Africa. Interestingly, it is the male birds which arrive first.

After the Wheatear it could be a Sand Martin, Swallow or Chiffchaff you see next, though for the latter you’re far more likely to initially hear it than see it – its easily-recognisable ‘chiff-chaff, chiff-chaff’ song delivered from the branches of trees which are yet to see their first leaves.

But even if it is a Wheatear or Chiffchaff that you first see or hear this spring, for many people their spring only really becomes official with the sight of a Swallow. This long-distance migrant to the UK will have spent its winter in South Africa, and covering around 200 miles per day and at an average speed of about 20 miles per hour, eventually arrives back to our shores. And for the Swallows which venture as far to nest as the north of Scotland – even Orkney and Shetland - just consider for a moment the truly epic journey they make.

And the last summer migrant to arrive back? Well that accolade would normally be the Spotted Flycatcher, with the first of these now increasing rare birds not arriving until late April and early May.

We’d love to hear your accounts of the very first summer migrants you see in your gardens or when out on your travels, so do let us know by commenting on our Facebook page.