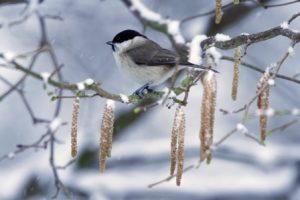 We all know that the birds that visit our gardens in winter need more food to keep themselves warm when the temperature really drops, but the extent to which this is true and the level of importance dependent on bird size, is worthy of some exploration.

Let’s take one of the smaller species as an example: the Blue Tit. Like all our garden birds, Blue Tits need to put down fat reserves to make it through the longer winter nights (when they obviously can’t feed). However, unlike a larger garden bird such as a Collared Dove, the Blue Tit is probably only able to put down enough fat in a day to make it through one single long and very cold night. This immediately explains why Blue Tits are so active on short and very cold winter days, as a) they have less hours to collect food – perhaps less than 7 hours in the depths of winter in the far north of the UK – and b) they need to eat almost their body weight in food in this limited space of time. In fact, a Blue Tit weighs around 11g, and would ideally need to consume around 300 small insects with a combined weight of 10g in just one day. And that many non-active tiny insects tucked away in crevices (insects don’t technically hibernate but enter a state called diapause which allows them to withstand freezing temperatures) can be awfully hard to find – even in a woodland environment, rich in mature native trees. And of course, searching for those insects burns up a lot of energy and therefore reduces the level of fat being laid down.

This also explains why, in severe cold weather, we see an increase in the sheer number of birds in gardens where food is provided, as it’s relatively easy for them to find the quantity of food they need versus other habitats such as farmland.

Simply putting out any wild bird food in a garden does of course make a positive difference, but there is so much more which can be done to help ensure that small birds build up those short-term fat reserves to make it through a long and cold night:

It can be a sad sight indeed to witness a single seed feeder with 6 just perches and 30 birds competing for them. More dominant species such Greenfinch will usually take the available perches anyway, then squabble between themselves if they total more than 6. To make matters worse, as the birds frantically flutter around the single feeder looking for the first available perch, they’re wasting valuable energy and not putting on the fat reserves they need. The bottom line is that smaller birds such as Blue and Coal Tits can really miss out.

So it is about having plenty of feeders and different sorts – e.g. hanging seed feeders, mesh peanut feeders and ground trays – but it’s also about where you put them. And here’s a great little tip: As a rule of thumb, the smaller the bird the less shy it is. So if you also place a peanut or suet block feeder very close to your house – so perhaps by the back door – you’ll find that smaller species such as Blue Tit, Coal Tit and Siskin will happily feed on it, whereas larger and more aggressive species such as Greenfinch probably won’t, and instead will stay on the main feeding station which is further away from the house.

This is a fairly obvious one, but worth covering anyway, as it’s hugely important in the context of what we’re talking about here. The best examples of high energy foods – with that energy coming from high fat – are sunflower hearts, peanuts and suet products such as pellets and blocks. And the reason we say sunflower hearts rather than black sunflower seeds (which the hearts come from), is that it takes less energy for a bird like a Blue Tit to eat because it doesn’t have to chisel off the husk, plus the bird can also therefore consume more food in a given period of time.

On a final note, the other great thing you can do to help small birds like Blue Tits get through those long winter nights, is provide a nice dry (and therefore warmer) nest box to safely roost in. Now is anyway a really good time to put one (or two or three!) up, as Blue Tits start to decide on a nest site as early as February. Which is a comforting thought, as by then we can all start thinking about spring.