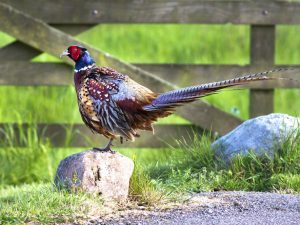 Survival of the most artful

Rooks calling from our treetops where they normally nest, mistle thrush singing their hearts out in a gale and the call of a barn owl in the still dead of night, this is our farm where we are lucky to live. Although not out of winter yet, wildlife knows it is not far away. Daylight hours are visibly starting to stretch and it seems birds are among the first to notice. Life is a competition, and all those that can steal a march, get a head start. But life is a gamble. Dare I say it, but we are not out of the woods yet. Although every day we inch towards spring is a bonus. Even in Devon the difference between the windswept uplands of Dartmoor and the most sheltered coastal valleys is marked. Not for nothing is Torbay known as the English Riviera. Here Mediterranean plants can survive all but the harshest winters. Yet the feeling that spring is underway is now all around us and that will steadily move north. Birds defending their territories and snowdrops bursting out hedgerows gladden our hearts. However, we are not out of winter yet, even here in normally sunny South Devon, the occasional cold snap can still catch us with an icy surprise.

The biggest danger for wildlife at this time of the year is not cold but simply finding enough food. Birds are well insulated with their thick feather coats and some are smarter than others. Even better many are quite simply more attractive. Not only is the robin's boldness impressive but so too is their beautiful red breast. In contrast the delicate hues of the blue tit seem more muted, but there is a fine line between showing off and surviving a predator’s attention.

Some years ago, I made a major BBC television series that featured the wildlife of Britain from a very different angle. It focussed on creatures that live in landscapes heavily managed by people. Among the most scenic are large historic estates, often open parkland and farms with magnificent specimen trees. Having an owner keen on cultivating wildlife is a real bonus. Often landscaped by some of the biggest names in the business, these estates are often not as heavily overseen as they once were. Some of the more carefully managed, still feature deer parks and release game birds. Many of these creatures were once alien to Britain but over time have become part of the natural scene. With the increasing evidence of even low levels of lead poisoning on human health, the days of spraying such pellets across fields and especially wetlands is coming back to bite us. Swans and geese appear to suffer the most but even shop-bought game is not free from this danger. Thankfully the transition to steel ammunition at least offers less danger to us.

One of the most popular introduced game birds is the spectacular pheasant. Introduced from the far east, exotic and strutting, they often appear to be more beautiful than big brained. Or so I thought. It turns out that an increasing number of pheasants have learned to survive winter shooting by staying firmly on the ground. While most birds are flushed by beaters, some pheasants run back between their legs. These are the survivors now living wild in our countryside.

I am increasingly convinced that the pleasure we find attracting wild birds to our gardens also does us good. Indeed, the current pandemic seems to prove it. The clever birds have learnt that people are a good source of food. Especially if they make themselves more obvious. Who has not had a robin following them round their garden? Now I know who is training who!