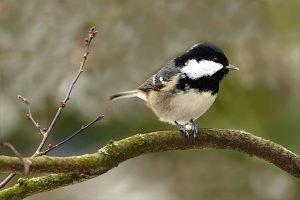 Coal Tits are a fairly regular visitor to most garden feeding stations, with the exception of areas with few trees and in particular few conifers – where we are in the Lincolnshire Fens being a good example. But where this delightful little bird does occur it carries out a very interesting behaviour which can be observed anytime between June and December, and it’s called ‘caching’.

What this involves, as the name implies, is hiding and storing food for when it’s need – and in the Coal Tit’s case when the weather is exceptionally cold, and therefore food would otherwise be hard to find.

So when a Coal Tit finds a suitable supply of, say, black sunflower seeds and all handily available from an easy-to-find hanging tube feeder in someone’s garden, it will take a seed, hide it somewhere such as a crevice in tree bark, then return time-after-time to do the same thing. Indeed, a small flock of Coal Tits can empty a whole feeder of back sunflower seeds in less than a day doing just this. And if you didn’t know that the birds were caching the food rather than eating it (though they will, of course, be eating some in the process to keep energy levels up), then you might be forgiven for thinking that hundreds of them were involved in the sortie on the feeder, rather than the more probable number of half a dozen.

As part of their caching strategy, individual Coal Tits will use multiple locations to hoard their winter supply of food. This is called ‘scatter hoarding’ and basically ensures that if another species of bird – e.g. the more dominant Great Tit – finds the food cache, then it will be one or two seeds only and not a fat pile of them.

Coal Tits can easily be overlooked at garden feeding stations, as even when they’re feeding rather than caching they tend to carry out short commando-style raids and don’t hang around for long. They’re also the smallest of the UK tit species, which is part of the reason why they often don’t stay at feeders because they’re regularly bullied-off by the larger Blue and Great Tits.

Like many species of very small songbird, Coal Tits are relatively tame (as a general rule, the smaller a bird species is the less bothered it is by a human being close by). Such is their level of tameness, is that if you stand very still close to a feeder, they will largely ignore you and carry on taking food such as black sunflower seeds as normal. This is both interesting and fun to do, as it means you can be within just a few feet of the birds and therefore observe them closely with no need for binoculars.

So keep an eye out for Coal Tits in your garden and their interesting caching behaviour, and if you want to help them prepare for the harsh winter months ahead, then put out black sunflower seeds which are ideal for the process given the natural protective coating and the inside being packed with fat and therefore energy.