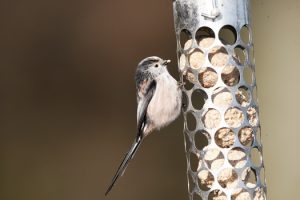 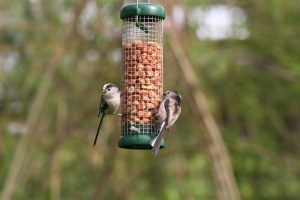 It’s surely fair to say that no other small garden bird has quite the same charm and level of uniqueness as the Long-tailed tit. Suddenly arriving in gardens in an extended family group of up to 20 birds, they make their presence immediately known with almost constant twittering calls, interspersed with higher notes. Then once their favoured suet or peanut feeder is located, they all cram onto it in what seems like impossibly large numbers for the surface area – their almost absurdly long tails sticking out in every direction as they frantically peck away at the food. Then a few minutes later and having had a fill of peanuts, suet or both, they’re off again in their bouncing flight movements and might not return for a day or two.

The small bird with a long tail

Sometimes one of our customers, who is perhaps relatively new to feeding the birds in their garden, will ask if we know what the ‘small bird with long tail’ is feeding on suet balls or a peanut feeder, which we know straight away. But the explanation of it being a Long-tailed tit sometimes puzzles them, as it doesn’t really look like other species of tit – and there’s a good reason for that: It’s not a member of the tit family at all. In fact, it’s a member of the Aegithalidae family, and, interestingly, most of the other ten species in the family are resident in woodland areas in the Himalayas. Our single UK species from the family has a rather lovely scientific name to go with its lovely appearance: Aegithalos caudatus.

The Long-tailed tit’s nest is a true wonder of nature – as anyone who’s been lucky enough to see one will testify. Hidden away in a hedge or bramble thicket, it’s largely made from moss and held together with hair and spiders’ webs, with the final dome-shaped structure being fully enclosed other than for a single and small entrance hole. The birds expertly camouflage the outside of the dome with lichen, and on the inside they line it with hundreds of soft feathers. And because the elaborate nest can take up to three weeks to construct, work often starts as early as late February – so by now many nests will be fully complete.

How feeding Long-tailed tits has increased their numbers

Unlike many other songbirds, the species is actually doing rather well in the UK, and has increased in numbers considerably since the mid-1980s. Notably, this increase has been most apparent in urban areas, which strongly points to the increased popularity of feeding garden birds as a key factor, and specifically the species’ readiness to feed on peanuts and suet products – in particular helping the birds get through harsh winters.
Long-tailed tits occur across the UK except for the far north of Scotland, so if you don’t currently see them in your garden then the reason could be down to the foods you’re not putting out. Probably the best way of attracting them is suet balls or a suet block in a special cage, or suet pellets in a mesh feeder. Peanuts in a mesh feeder are also a favourite of this truly delightful little bird.
So this small bird with long tail feathers that is not really a tit at all, is highly sociable, builds fantastic nests, and really is the most delightful little bird you’ll ever attract to your garden.