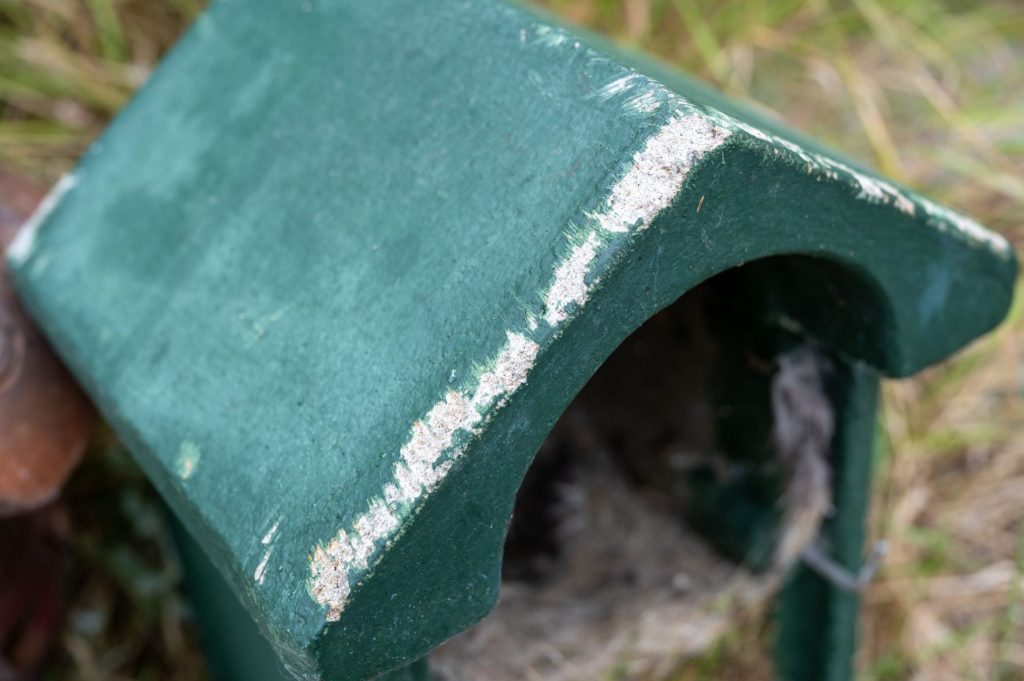 The problem with squirrels

I get the feeling that our local squirrel population gets bored! They seem to want to chew on just about anything, edible or not, as I don't consider Woodstone to be edible. Those of you who read an earlier blog post in which I wrote about how, after a number of years, a pair of tawny owls successfully raised a family in a nest box put up some years ago, may have noticed the top bracket of the owl nest box. That particular box is showing signs of squirrel 'attention'. This is despite the bracket being made from a very tough plastic material. So, I suppose it should come as no surprise that the squirrels should turn their attention to some of the other nest boxes close by.

As it's getting to that time of year when nest boxes are due for their annual clean, the damage caused throughout the year, by squirrels and the occasional woodpecker visit, becomes evident. And although it often feels sacrilege to destroy the hard work of the birds that have built the nests, the potential harm from parasites is too big a risk to run. So, a few days ago, we took down one of the newest nest boxes to clean it and check it over, and it was then that we noticed what it had obviously caught the 'darling little rodents' attention.

They are nothing if not brave to take on the challenge of chewing away at the new nest boxes as they are made from Woodstone, which is a mix of concrete and wood fibres. The advantage of this material is it is not only very strong (and heavy), but it also maintains a more constant temperature for the birds inside. The nest boxes are more expensive, but the additional cost seems more than justified when you look at what they've managed to withstand.

Being surrounded, as we are, by trees makes for a lovely environment to live in, but it brings its own problems, not least of which are the grey squirrels. We now have every bird feeder surrounded by its own protective cage, but we continue to battle against these visitors and to try and dissuade them from getting onto the bird table. Despite our best efforts, they have managed to get around the sizeable baffle fitted to the bird table, and with this time of the year being peak squirrel season, we are seeing more than we'd like of these little critters.

Oddly enough, the squirrels don't seem to have bothered with any of the wooden nest boxes we have up in the garden. You would think that being made from a far easier material to chew on would be more appealing, but it would seem they are keen to find materials to file down their teeth. Being blessed with teeth that continue to grow, squirrels need to file them down to stop them from having problems feeding, and for us, the file of choice would seem to be Woodstone.

You have to give them credit for taking something so tough and for managing to make some significant inroads into the roof of one of the boxes, but I'd still prefer it if they went and nibbled on a rock!