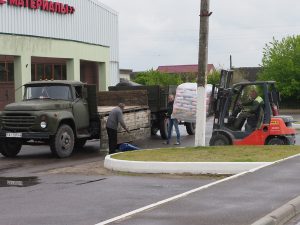 Belarus, a dream that was more than a dream

During the first week in May I went to Belarus with a friend to see birds that we don’t, or seldom, see in the UK and also see a bit of life in Russia. Having said that, you don’t go to Russia for a good holiday, you go for the experience.

We stayed in hotels in country towns which normally only have one hotel and one or two café/restaurants. People do not travel about much and there are no reps on the road because there is no competition.

Belarus is about the same size as the UK and the population is only 10 million, so there is not the same pressure on the countryside as there is here in England. It roughly lies on the same latitude as England.

At one town, Kamieniuk, near one of the national parks, the hotel we stopped at was full. The receptionist rang round and was able to direct us to No8 The Embankment, a bed and breakfast -although they didn’t supply breakfast. When people travel, they normally take their own food with them as the quality and choice of food in the shops, until recently, was diabolical.

This house had a garden of about half of an acre, with some Alder trees at the back and some land that ran down to a small river. On our first morning, I sat out in the garden taking in all the sounds and sights of the wildlife that I heard and/or saw. There was a bird table in the garden, but it was only used in the winter - as would ours have been 40 or 50 years ago.

There was one bird that stood out above all the rest in the garden and that was the Thrush Nightingale, what a songster it was! Much quieter, but singing non-stop, was a Yellowhammer and a Garden Warbler. There was a Cuckoo that was calling constantly, in fact wherever we went during the week there was always a Cuckoo calling. Now and again I could hear Common Cranes bugling and then a White Stork flew over. Chiffchaff, Chaffinch, Greenfinch and Goldfinch were all joining in with the chorus. Another bird flipped up into the alder trees, it was a Common Redstart and while I was enjoying him two Hawfinches came in view. The Redstart dived down from his perch to fight another male Redstart, there were two pairs nesting in the garden! One pair was nesting in a Starling nest box, there were four Starling nest boxes in the garden, and I should think there were Starling nest boxes up in every other garden. The White Wagtail was feeding young in a metal pipe.

There were a few birds that just flew over - a Raven came over honking, a Wood Pigeon flew over quietly and four Mallard, and three drakes chasing a duck. A Swallow was back and forth, I think it must have been nesting in a neighbouring garden. In the background, I could hear the rich fluty notes of a Golden Oriole and the strident song of a Great Reed Warbler, what a voice he has. I saw a House Sparrow who came to feed on the maize that was put out to feed the carp in a pond and then there was a Great tit, a Blackbird, a Reed Bunting and Blackcap singing away.

On the second morning while having our fat bacon sandwiches - our landlady realised we hadn’t brought any food with us and came trotting out to us with a mug of black tea and fat bacon sandwiches, with not a streak of lean in the fat, the bacon was complete with rind. We were sitting on a bench overlooking the carp pond and were able to increase the list of birds to 35 with Serin singing only 10 yards away. Black Redstart, Lesser Whitethroat, Fieldfare, Linnet carrying nesting material into an apple tree, Spotted Flycatcher and River Warbler which was very quietly reeling away in some young trees just outside the garden. It took a bit of sorting out, it was a bird I had never dreamt of seeing.

With a population of only 10 million people, there is very little pressure on the countryside, there are undrained marshes and natural woodlands, the farming is far less intensive than ours and there is no rearing of pheasants.

There are too many of us on our island with too many vehicles buzzing around. The rearing of millions of pheasants is providing the foxes, badgers, buzzards and the crow family with a surplus of food and they are chipping away at our smaller birds, the ones we love to have in our gardens. The pheasants themselves are scouring the woodlands, where they are released, for insects and emerging plants, eating the food that the smaller birds will be looking for to feed their young. No wonder we have - and will continue to have - silent springs.