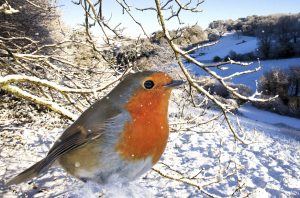 As a wildlife filmmaker, I know only too well that getting close to your subject is the greatest challenge, after finding them. Yet some creatures seem only too eager to come close. Of all the birds in Britain, none is better known, and enjoyed, than the robin. Cheerfully coloured, especially in mid-winter, the robin stands out at the coldest time of the year. But only here. Elsewhere in Europe they are shy and keep a low profile in woodland. Probably because they are hunted. Yet here in Britain they are bold, even demanding. If we step outside the house in freezing weather, the robin is often the first bird to make its presence known. A clever tactic, because our robin seems to know they are safe around people. Even better, we are a soft touch when it comes to food. Topping up the bird table, I usually have a robin prancing somewhere below, ready to pounce on the smaller bits of crushed peanuts I scatter on the path. Research has revealed that our robin is a separate subspecies. A bird that also sings through the coldest months.

Mid winter is a tough time for most birds, especially if you are small. So the way our red-breasted feathered friend follows us around the garden is not only a clever tactic, it's natural. What did the robin do before we started gardening and turning the soil? The answer is - they once followed any creature turning over the ground. So perhaps we are the next best thing to a wild boar. But the ever adaptable bird has taken a step further. Many people have robins that come into the kitchen through an open window or door. Here they usually get a crumb or two in reward. Gardeners and photographers know that by moving slowly, avoiding the impulse to stare, seems to make our most beautiful little bird even bolder.

The British robin has a big presence. Not only one of the few birds to have a human name but whose image decorates our home in mid winter. A melodious songster that will even sing its heart out at night. Some even suggest that perhaps the London nightingale singing in Berkeley Square was actually a robin!