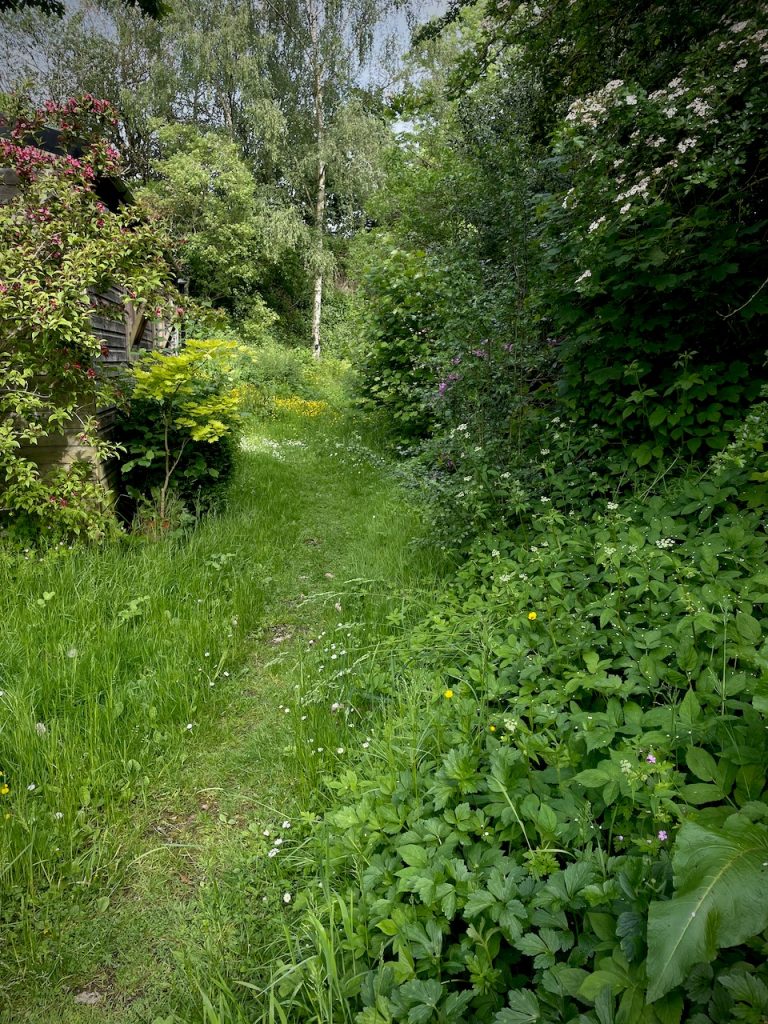 Did you mow in May?

Did you take up the challenge of not mowing your lawns during May? As an advocate of leaving gardens, verges, and other usually highly cultivated areas to go wild, the recent campaign to leave  lawns untouched for a month was right up my street.

I come from a long line of avid mowers, who seem to do their level best to keep up with those who take part in the unofficial 'tidiest lawn' competition. Woe betide any blade of grass that dares to break ranks and pop its head up above the level of its buddies. Strimmers also seem to be ever popular with sunny Summer days, encouraging my neighbours to do battle with verges and any clump of errant weeds they can find.

So, the idea of not mowing was like pushing on an open door as far as I was concerned, and as a result, our garden now looks like a green version of just about everyone's hair after the first lockdown! Unkept and wild are the best ways to describe much of it. A large part of our garden is often left to its own devices, but over the past two weeks, huge beds of buttercups, nettles and long grasses have sprung up. Dandelions, too, have done well, helped in no small way by the wet weather and the more recent return of summer temperatures.

With the garden now looking like a jungle, it's not surprising that there seem to be good numbers of insects buzzing about. I hope that the result of this increase in insects has resulted in more frequent visits by overflying Swallows and House Martins. This year, there would certainly seem to be more, although sadly, none nest in my immediate area. The same can be said of Swifts, who are now a rarity in my part of the world.

A couple of years ago, we swapped the nest box put up for the Blue tits who would regularly make good use of it. The new box was fitted with a camera so, as you might have guessed, they refused to nest in it! They, or should I say a Blue tit, did regularly roost in it every winter’s night. Thankfully, this seemed to encourage it to set up home and, as a result, eight eggs were laid. We kept a close eye on what was happening, and the parents were understandably busy feeding their growing family. Sadly, three eggs failed to hatch, but the other five thrived and fledged within the first couple of days of June.

We made sure they had a good supply of live food left nearby, and from what we saw, the parents were more than happy to feed their family on them. More usual insect food was also being gathered from the nearby trees and shrubs, which meant that our brood bucked the trend, as it would seem that Blue tits haven't had the best of breeding seasons. With Spring being late, the hoped-for glut of caterpillars and other insects didn't coincide with the hatching of the young Blue tits. As a result, numbers are apparently significantly down this year.

We can't be sure that allowing the garden to go 'free range' helped out Blue tits, or if the feeding of live food as well as our usual range of seed mixes, has helped our birds to thrive while others haven't, but I'm sure it can only have helped. With this in mind, it is good to read that a number of councils around the country are looking to reduce the number of cuts they make to verges etc. More need to get on board with this idea as it can only be good news for our wildlife. So, although it may seem wrong, and you might even get a little twitchy when you walk past the mower in the shed, it might be worth giving the grass a miss a bit more often in future.