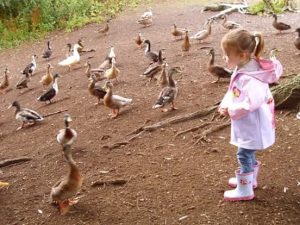 It doesn’t seem that long ago that feeding ducks and swans with bread at our local pond, river or canal was a perfectly acceptable thing to do, and either as children ourselves or as adults taking our own offspring, most of us have done it as some point in our lives. But in recent years there’s been a fair bit of coverage in the media telling us that it’s wrong and damaging to both the birds and the environment alike. So what are the problems and what are the alternatives? Here we take a look at both questions . . .

Although ducks such as Mallard and Mute Swans will often make short work of a whole loaf of nice sliced bread purchased in the local supermarket, it actually doesn’t do them any real good. White bread in particular contains little or no nutritional benefit to waterfowl, but worst still it fills them up and, as a result, deters them from eating the foods they actually need. One consequence of this lack of nutrition is that individual birds can go onto get a disease called ‘angel wing’, with this resulting in wing deformities which hinder flight and can actually end up with the bird not being able to fly at all.

Secondly though, uneaten bread – and often rafts of it can be seen on the surface of local ponds and canals after a busy Sunday morning’s feeding frenzy – can cause pollution and algal blooms (a rapid growth of microscopic algae or cyanobacteria, which often results in a coloured scum on the surface of the water). Indeed, our friends at the Canal and River Trust have urged the public to stop feeding ducks and swans with bread for this very reason.

So what can we feed ducks and swans that really benefits them? The ideal food is the new Duck and Swan Mix from Vine House Farm, which contains a perfect balance of wheat, barley, naked oats and kibbled maze. Another option and also to combine with the Vine House Farm mix, is frozen sweetcorn and peas – but obviously defrosted first.

One of the great things about encouraging children to feed ducks and swans is that it’s one of their earliest adventures in life where they’re able to get really close to wild birds. So it’s something we all need to encourage, but only with the right foods.