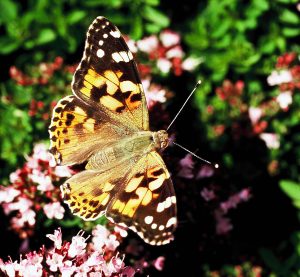 When reports of Painted Ladies were seen basking in the Devon sunshine, I should not have been surprised. Every few year vast numbers of these bright winged beauties suddenly seem to erupt. This year the butterflies were first reported in the heat of early summer. Now they have bred and their offspring are heading back south again for the winter. Who said butterflies do not have much of a brain?

Every year the mass movement of migrating birds at the end of summer fills our valley with diving swallows and house martins. Less obvious are the insects. Yet as the days get shorter countless numbers of moths and butterflies also head south. Recently watching dozens of these gorgeous creatures refuelling on a buddleia bush, the wonderful world of collective nouns came to mind. For concentrations of butterflies the most common term is a 'bunch' or 'swarm'. Another is a 'rainbow' but I prefer a 'kaleidoscope' of butterflies rather than a 'rabble'.  Whatever the word,  the simple joy of watching such a spectacle is enough to warm anyone's heart.  Barely the weight of a small feather, these butterflies were about to join one of the greatest annual migrations on earth.  A long and hazardous journey south to reach the shores of the Mediterranean.

As summer ends we can help to ensure the nectar these butterflies crave, continues for as long as possible. At this time of the year the importance of dead heading any fading flowers is vital. A sure way to extend this colourful seasonal show. It was a tip I first heard from that a talented philosopher of gardening, Don Hoyle. He was a popular and seasoned television professional when I first started making my appearances from BBC Plymouth. It was an experience I later put to good practise. Not only making wildlife documentaries but also producing many gardening programmes. Although my introduction to the small screen was more an experience than an education.

One bright morning in Plymouth's BBC garden, we ended our weekly programme recording how to construct a wildlife friendly garden pond. The show's director suggested we continued digging while the end credits rolled. After taking leave of our viewers with Don's cheery "enjoy your gardening"  and under strict instructions not to look at the cameras, we soldiered on. Having dug a sizeable hole, reality finally dawned. We were alone. The entire crew of technicians and floor manager, along with studio staff were long gone. While we were still in the television garden toiling away, they were merrily tucking into their lunch outside the BBC canteen watching the entertainment. Happy days!