News from the Farm
your regular update from Nicholas
TheWeather
‘If you stop feeding, the birds may not return to your garden as they would have had to move on to find food sources elsewhere’Nicholas Watts

The month remained quite dry, but from September 22nd onwards, the heavens opened and we had 3.4ins/86.4mm of rain. This was our 5th wettest September in the last 50 years, bringing our total rainfall for the year so far to 21.1ins/537mm, slightly above what we would expect for a whole year. You could say that we are still paying for the dry winter we have just had. Temperatures have been average, a mean of 14.2°C, but 0.3°C below the last 10 years.

Between 22nd to 24th September, we received an inch of rain. An inch of rain is the same as 100 tons of water falling on each acre of ground which made conditions just right for lifting potatoes. When conditions are too dry, the clods are hard, hitting potatoes and marking them. They may only be slightly marked but, if several potatoes have these marks, it devalues them. A sample of every load is scrutinised before they are accepted wherever they are going, too many faults in the sample could mean rejection of the entire load. The rain softened all the clods and the lifting went very well, so that inch was very welcome.

We then received more than an inch on Sunday 29th and a further .7ins/17mm on the evening of Monday 30th. The ground was then too wet to lift potatoes so we had to wait a day or two for it to dry up a bit. We have some big crops of potatoes this year, but with a lot of waste in them. Slugs have been very active in the wet weather this summer, they like to eat potatoes and a potato with one slug hole is not acceptable.

The wet weather has also prevented us harvesting the white millet – the strong winds and heavy rain showers knock it out of the sprays. We have a kind of insurance policy for this, as We earn more money from the wind turbines if the millet is knocked out by the wind and the rain, however I would prefer to harvest a good crop of millet.

One field of sunflowers have been sprayed to make them ripen earlier than they would do naturally. They will be harvested in the first week of October, weather permitting. The wind and rain do not blow the sunflower seeds out, but the longer they stay in the field the more Wood Pigeons arrive to eat them.

In farming, October is a race against time as every day gets shorter, it might get wetter and sometimes too wet to complete all the jobs in the fields. We then start to lose income.

In September, I went with my cousin on the longest regular train journey in Europe. It goes from Nice to Moscow. To get to Nice, we took the TGV from Paris. France was very dry, then we crossed the Po valley in Northern Italy, which is where our Cuckoos fatten up on their way south. Every field contained rice, then going north east into Austria, every field contained grapes for mile after mile. We traversed Austria during the night, and then into the Czech Republic. There were lots of factories which the Germans had built after the iron curtain came down, to take advantage of cheap labour.

In Poland, north to Warsaw and east to Brest, we never saw a tractor of more than 50hp as every farm was a small farm. Belarus was traversed in darkness and in Russia, en route to Moscow, nearly every state farm had been abandoned, there was virtually no farming.

I would recommend the journey, I saw a lot and learnt a lot. From Moscow we took the second longest train journey in Europe: Moscow to Paris – another interesting journey.

It is a sad story as far as Swallows are concerned. They had disappeared from here in the East by September 15th. House Martins stayed a few days longer, as they were still feeding young in the nest. In 2017, we had Swallows around until September 21st. In 2010, they were around until September 24th. In the 1970s and 80s, I could see a Swallow or House Martin until the middle of October. They are leaving earlier because they are running out of food.

This is in contrast to Stone Curlews in Norfolk, they are staying longer each autumn and one winter, a pair didn’t even migrate. Stone Curlews get an abundance of food from pig farms, so they stay longer. Food is the driver, so it is fair to assume that the declining birds are running out of food.

It is the same for Barn Owls – when there are no voles some cannot find enough food to get into breeding condition. This year, we have an abundance of voles and seven of the 11 pairs, that are breeding on our farm, are having second broods of four and five owlets. This year is similar to 2014, which was the best Barn Owl year ever. With heavy rain and windy nights during the last week in September however, one or two of the youngest owlets may have been eaten by the bigger members of their family.

The Owl box on our webcam is handy to the yard and I am able to throw a few day old chicks into the box after a windy or a wet night. They are completely different to a dead vole, but owlets do eat them.

However, prospects are already not looking good for a good Barn Owl year in 2020, as all the youngsters will stay around and eat voles until they are in short supply. They will then move away to find a better supply, leaving their parents with a meagre supply of food. April seems to be the critical month; a dry April makes for a good vole year and a wet April, a bad vole year.

Whatever we try to do to increase owl numbers, there will always be good and bad years. The number of voles around depends on the amount of rain and how many animals and birds there are to eat them. Buzzards never used to be around here, but they eat voles as well as Kestrels, Tawny Owls, Foxes, Stoats and Weasels. None of them rely on voles as much as the Barn Owls do.

Goldfinches are busy feeding on the teasels and Burdocks that grow on our uncut margins. Teasels will soon have dropped all their seeds, but the burdocks do not shed their seeds until next spring. These seeds stay on the plant until becoming attached to someone or something as they brush by, therefore dispersing to other areas.

We have plenty of flowers on the farm during the summer, but we certainly lack ivy here in the Fens. Some of our fields will be over a mile from the nearest ivy, so we have been planting some with frames for it to grow up, rather than it climbing up trees and bushes. Ivy is the last plant to come into flower and if you go to an ivy plant during a nice day in October, it will be buzzing with insects. The flowers turn into berries which are available all through the winter and there is shelter in the foliage from the winter storms. Ivy is an excellent plant for wildlife. 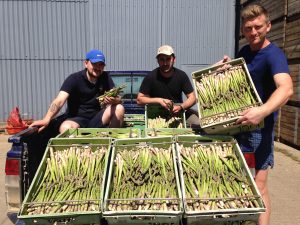 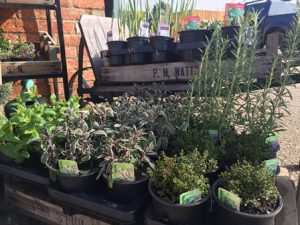