Despite the cold spell at the beginning of the month, February ended up being a little warmer than average, at 4.3°C. In 1963, the average January and February temperature was -1.5°C and one day the temperature only rose to -6°C! The last time we had any days when the daytime temperature stayed below zero, was when we had the ‘Beast from the East’ in 2018. 50mm (2ins) of rain fell in February, well above the monthly average of 33mm.

Here in South Lincolnshire, it stopped raining on February 18th and on February 23rd, the sun shone and the wind blew. It was our first drying day for about five months; a superb day. One of our men asked about putting nitrogen on the rape fields that day. ‘No’, I said, ‘it is too wet’. Then, at lunch time, a neighbour came to borrow a long chain, as his tractor was stuck fast in his rape field. The drying weather has continued, and we are now applying nitrogen on to our rape fields.

There are a lot of water-logged fields in the Fens, some because the fields need draining, or the water is there because the farmer had to harvest a crop when it was unavoidable, or attempted to cultivate when it was to wet. When conditions are against you, the correct decision is not always made.

February is when we loaded pre-sold wheat, barley and potatoes onto lorries. Pre-sold because if you’re running a business needing 100-1000 tons of grain a day, you’ll want to know in advance that you have enough coming, as you will also have pre-sold your products.

Potatoes are much the same, probably 75% of the potatoes that are going to the supermarkets are sold forward and the other 25% are bought on a day-to-day basis. Although a packer will have a contract with a supermarket the tons of potatoes wanted will vary day to day. The crisping sector of the market is different, I expect 95% of their potatoes are grown on contract.
The potatoes for crisps are different to those for the fresh retail market and the chipping factories. The crisp manufacturers need a small round potato that is fairly dry and has been stored at 7/8°C. If it has been stored below those temperatures, when made into a crisp it will be a dark colour and not acceptable.

The fish and chip shops also need a lot of potatoes and their requirements are similar to the chip factories but, in general, none of them are grown on contract. The chip shop cannot cook a sample before his tonne has been dropped off, but if the potatoes don’t cook very well, the merchant would be asked to come and pick the potatoes up.

Contrary to all other markets, the potatoes we sell to go in the supermarkets are kept at 2/3°C. This keeps them looking attractive, as the low temperature stops skin diseases spreading and, of course, we all buy with our eyes, so when you make chips out of potatoes from the supermarkets they will usually come out the pan a dark colour.

Having surveyed my farm for 10 years, and realising that our farmland birds were declining, I decided to widen my survey on to neighbouring farms, really to find out more about Corn Buntings. From initially surveying 700 acres, I was soon surveying 4000 acres – up and down the dykes in Deeping Fen. A boring area to some with no hedges, but there are five spinneys planted about 20 years previously.

Corn Buntings are quite easy to survey, the male sings all through the summer, while other species may sing until their mate goes down on eggs, and then they go quiet. Although I was looking for Corn Buntings, I recorded every bird I heard and saw. I also recorded the cropping. Corn Buntings like winter barley best, Reed Buntings like oil seed rape, Whitethroats like rough areas where the farmer hadn’t mown the year before. Every species has different habitat requirements.

After a few years, I knew where to expect each species and I was enjoying my annual survey which was taking place during the second half of May, starting just after sunrise. I was walking 40 miles during those early mornings and would seldom see anyone. However, the joy of seeing the Meadow Pipit doing its display flight, hearing the Corn Bunting’s jangle of keys or the Yellow Wagtail’s scratchy little song, were all thrilling to me.

On those 4,000 acres, there was one bit of habitat that stood out. It was a series of ponds that had been dug originally for fish farming, with bushes planted on one side. The fish farming didn’t work out, but the habitat remained. It is always brimming with wildlife – Reed and Sedge Warblers, Reed Buntings, Whitethroats, Blackcaps, Moorhens, Tree Sparrows, Chaffinch and other common species.

We went on to excavate four ponds, that vary from 150 metres to 300 metres in length, but only 10 meters wide. All have two hedges on one side of the ponds, placed 10 metres apart and wild flower areas between the hedges. All of them now brimming with wildlife.

We were soon entering another stewardship agreement, so we didn’t need to ask the Natural England adviser what habitat to create. The proof was written on the survey maps, gathered from walking hundreds of miles over the years before breakfast, appreciating the amazing sounds and sights of our farmland birds advertising their presence, in habitat that my father, grandfather and great grandfather had fashioned.

In the Vine House Farm garden, February has been a month of falling out between Robins, Blackbirds and Moorhens. At the beginning of the month there were 14 Moorhens in the garden, but at the end of the month, there were only two left. The rest have been driven away from a lovely food source, by the dominant pair of Moorhen, and all must find a new territory of their own. Meanwhile, the Robins and Blackbirds continue to bicker and whilst this is going on, the Starlings come in and pinch their food. At the end of the day though, there has been enough for all of them.

For the last 2 months we have had a wildlife spectacle in the parish, we have had up to 500 Whooper Swans and a few Bewick Swans feeding on a sugar beet field. At night, if the wind is right, we can hear the Whoopers bugling away from the farmhouse, which is a mile away. All of this is due to the very wet weather we had in December and January. There are large puddles of water on the sugar beet field which suit the swans, as they have food and water in the same place. They then go to roost on an even larger puddle of water in another field, where they can swim. There are no hedges on this farm, so the Swans have good vision all around and feel safe. During the next two weeks, I am expecting them to be heading north on their way to Iceland. 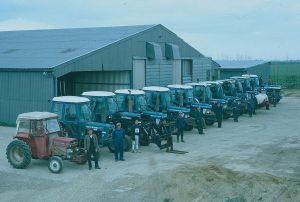 December was a wet month, with our local pumps having to manage 8 million tonnes of water
Read More