News From The Farm
Your regular update from Nicholas
TheWeather
‘The most important time of the year for birds is the breeding season, and the absolute best food to put out during Spring is Live Mealworms’Nicholas Watts

February has been milder than normal with only two air frosts, the mean temperature has been 6.5°C, only five milder Februarys in the last 50 years and they were all in the last 25 years. It has also been wetter than normal with 47mm of rain, the average here at Deeping St Nicholas being only 31mm in February, our driest month.

Most unusually, we were drilling spring beans and spring barley during the first ten days of February. I can’t remember drilling spring barley so early. The soil was fit, so we thought we should get some drilled and the seeds went in very well. The wet weather started with us on 12th February and we then had rain on every day for ten days, so the land is far too wet now for us to do any drilling.

I mustn’t complain about the wet February as overall we have had a dry winter and I don’t suppose all the aquifers – the body of rock and/or sediment that holds groundwater – have been filled up yet.

We have about 70 acres of land that were drilled with a catch crop last autumn. That is now dying off and I am hoping to see Lapwings taking up territories soon, as there are three or four that have taken up territory on our 35 acres of wetland. Unfortunately, we didn’t get the mix we thought we were getting to sow as a catch crop, the vital ingredient – oil radish – was missing in the mix, that is why I said hoping to see the Lapwings, as oil radish seems to be the key ingredient that attracts them.

Lapwings, like most birds, return to the area where they bred the previous year. They roost as a flock during the day; some will be sleeping and some will be awake. This is so there will always be someone to raise the alarm if danger approaches. At dusk, they all fly off to various fields to feed, that maybe a different place each night until they are satisfied they have found a field with sufficient insects to raise their family. Their big eyes mean they can see in the dark.

Potatoes are a worry to us, as this is the third year that we have been selling the non-contract potatoes at a loss. Every year, we have at least 30% of our acreage for chipping potatoes and they are all on contract. The rest we grow for potatoes that are bought in supermarkets. There are contracts available for these potatoes, but they generally don’t leave us much of a margin, so we sell less than half of them this way.

The six metre wildflower margins and various other features we have on the farm are paid for by Natural England, but they are not really a paying crop for us here in the Fens as we can earn more money by growing crops. However, we must think of the future, – if we just keep growing crops we are reducing the numbers of insects, so by having the six metre wildflower margins we are increasing the numbers of insects. These are needed to fertilize our crops and provide food for the birds to feed their young.

Four years ago, we had 150 pairs of Tree Sparrows nesting on the farm, last year we had about 50. I cleaned out all the nest boxes before Christmas and at the end of January I looked in a few of them. There were nests in them that were nearly fully built, so I can see those pairs that are remaining with us are pretty keen to get going. Tree Sparrows like to nest colonially – what used to happen was they nested in holes in trees and buildings. After a few years, these holes would be filled up with all the nesting material and so the Tree Sparrows would have to move on. This moving on is part of their life and so that is what I believe is happening on our farm and what has happened at other places that have lost Tree Sparrows.

The windy weather during the middle of February has been bad news for Barn Owls. Barn Owls hunt mainly by sound when they are flying along a dyke or hedgerow, and when it is windy or raining they cannot hear voles or mice moving about in the long grass, so they go and sit in a building on noisy nights. Apart from the noise when it is raining, their feathers are not waterproof so they have to be inside when it is raining, but they do have the ability to fly and hover in complete silence. There are less buildings about than there used to be, our old brick barns which are no use to us as we cannot get tractors or implements in them are falling into decay and they then get taken down. The buildings that we store potatoes in have to be closed up as they are kept at a certain temperature and we mustn’t let daylight in to the building. Our grain stores are a bit different, we can leave a door ajar or even leave a hole for a Barn Owl to get in which we have. It only has to be a six inch square hole and that could be a life saver for a Barn Owl.

I haven’t seen a Little Owl on the farm now for several months. I am not too bothered about them, as they are not native and they can do serious damage to our small bird populations, up to the size of Wood Pigeons. Our small birds, including Wood Pigeons and Stock Doves, need brooding for the first seven days of their life. After these first days, they can then keep themselves warm and it will need both adults to look for food for the brood and that is when the Little Owl moves in and takes the young to feed her own brood. We do not find bird bones in Little Owl pellets because the bones of these young birds can all be digested by the Little Owls. 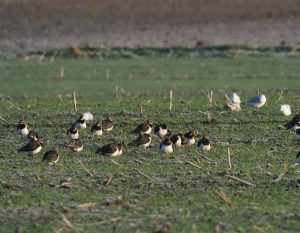 Nicholas describes his tour around the farm, feeding the farmland birds
Read More