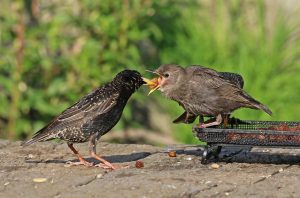 Why is it we don't all love Starlings?

So just why is it that you’ll rarely or never hear someone say “Starlings are my favourite garden bird and the more I get on my feeders the merrier “? Well perhaps it’s partly because when they do turn up in your garden they have their mates with them. In fact often quite a lot of mates. And those mates don’t always behave in a terribly orderly and civilised manner but, rather, a bit like a group of noisy yobbos. Taking turns on feeders isn’t an option in the mind of a Starling - no, it’s who can get on the feeder first or push your friend off if he or she beats you to it. And the type of feeder won’t matter too much either, with peanut feeders, suet cage feeders and tube feeders full of tasty sunflower hearts all being viewed as fair game by this speckled, always apparently hungry, and feisty little character.

Starling numbers in the UK have sharply declined

But can’t some or all of these traits actually be seen as qualities? Well apparently not easily for many garden bird lovers, so at Vine House Farm we’re on a bit of mission to change perceptions and, if we can, encourage folk to start loving Starlings. And actually, and seriously, we do need to start loving them because their numbers have declined by a truly frightening 66% since the 1970s. There are complex reasons for this decline, but a principle one is around the availability of invertebrates during the breeding and fledging seasons. Lack of suitable nesting sites is probably also a factor, with modern buildings providing few, if any, crevices for Starlings to squeeze into – a favourite type of nest site for them.

The things we DO seem to love about Starlings

A few positive things that perhaps we do all seem to agree on, are firstly the Starling’s ability to mimic other birds’ songs and calls (in moorland and coastal areas they’ll even mimic Curlews), and secondly the amazing site of thousands of birds together as they swoop and turn in perfect unison as they prepare to land and roost for the night - which is called a murmuration. And you’ve probably seen this spectacle on various TV wildlife programmes like BBC’s Autumn Watch, but seeing it in real life is something truly special and worth making the effort for (top five spots in the autumn and winter are Westhay National Nature Reserve in Somerset, Gretna Green in southern Scotland, Leighton Moss in Lancashire, Fen Drayton Lakes in Cambridgeshire, and Aberystwyth Pier in mid-Wales).  A third point is that Starlings are exceptionally devoted parents, having only one brood per year and rearing their young in an impeccable manner, which includes showing them the way to bird tables and feeders once they’ve fledged.

Starlings are no more greedy that any other garden bird

A specific observation we often hear about Starlings is that they're greedy. However, the reality is that they're no more greedy than any other songbird, and it's simply the fact that, as a very gregarious species, they're competing with others in their flock when they discover food. So the frantic and aggressive feeding is simply an instinctive necessity, and if individual birds didn't do it then they wouldn't survive for long.

Ways to help Starling numbers increase to where they should be

So maybe we haven’t quite yet convinced you to start ‘loving’ Starlings, but perhaps just ‘like them a little bit more’? If yes, then there are two things which you can do to help reverse the decline in their numbers. Firstly and right now, providing live mealworms will help with breeding success and help more fledglings survive – and the latter is vital because in past decades around a third of fledgling survived their first year, but now that figure is down to just 15%. Sultanas soaked in water are another great food for them at this time of year. The second thing you can do is put up one or two Starling nest boxes . For this breeding season it will be too late, but don’t worry about that – buy them and put them up now anyway so they’re ready for next year.

At Vine House Farm the humble Starling is one of our favourite birds. It might not be the prettiest bird to look at, it might not have the sweetest song, and it most certainly isn't the best behaved and mannered, but for all those reasons and more we love them just the same.