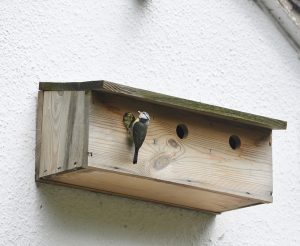 What is National Nest Box Week?

National Nest Box Week is an annual event that has been taking place for over twenty years, and always runs between 14th and 21st February – the significance of the start date being Valentine’s Day, as birds also get romantic at this time of year.

The event was started by the BTO (British Trust for Ornithology), and at Vine House Farm we’ve always thought it a great initiative and hence why we get behind it each year.

How can you get involved?

If you have a garden – even if it’s a very small one – then there’s always room for at least one nest box. And if you don’t have your own garden, then chances are a friend or relative will have, so why not see if they’ll let you put up a nest box in theirs?

Why are nest boxes important for birds?

The majority of garden songbirds which use nest boxes are woodland species which have adapted to more urban life, but with a lack of mature trees – and especially those with at least some dead wood in them – they often struggle to find suitable nesting holes and cavities.  In addition, modern housing has very much reduced nesting opportunities for species such as house sparrow, starling and swift, which historically would have used gaps and crevices in buildings to nest in. In essence then, a nest box replicates either a natural nesting site or one now largely absent in modern buildings. On the latter, it’s notable that house sparrow, starling and swift numbers have all declined in recent decades, and whilst lack of nesting sites isn’t the only reason, it’s certainly one of the major ones.

Along with providing a nest site for breeding, the other vital role nest boxes play in the survival of our resident birds is a roosting site for cold winter nights. Indeed, providing even just one nest box in your garden can make all the difference to the survival of bird such as a blue tit.

Which nest box should I choose?

The number of different nest boxes might seem daunting but, once you understand the main principles, it all becomes simple, as it’s based on what species of songbird use different types. The choice of box has a bearing on where you site it in the garden, as different bird species favour different locations.

There are two main types of bird boxes, put simply, those with a hole and those which have an open front.

Read our nest box guide for information on the best bird boxes for different species, the different types of nest box and guidance for where you should put nest boxes.

Read our guide which includes details on nest box maintenance and how you clean our nest boxes.

Finally, we think that BTO's nest box challenge is a great initiative to get involved with. For one it helps the BTO gather important data on garden birds, plus it's also fun and interesting to take part in. So have a look at what's involved and get your nest boxes registered.

Our positon on plastic packaging