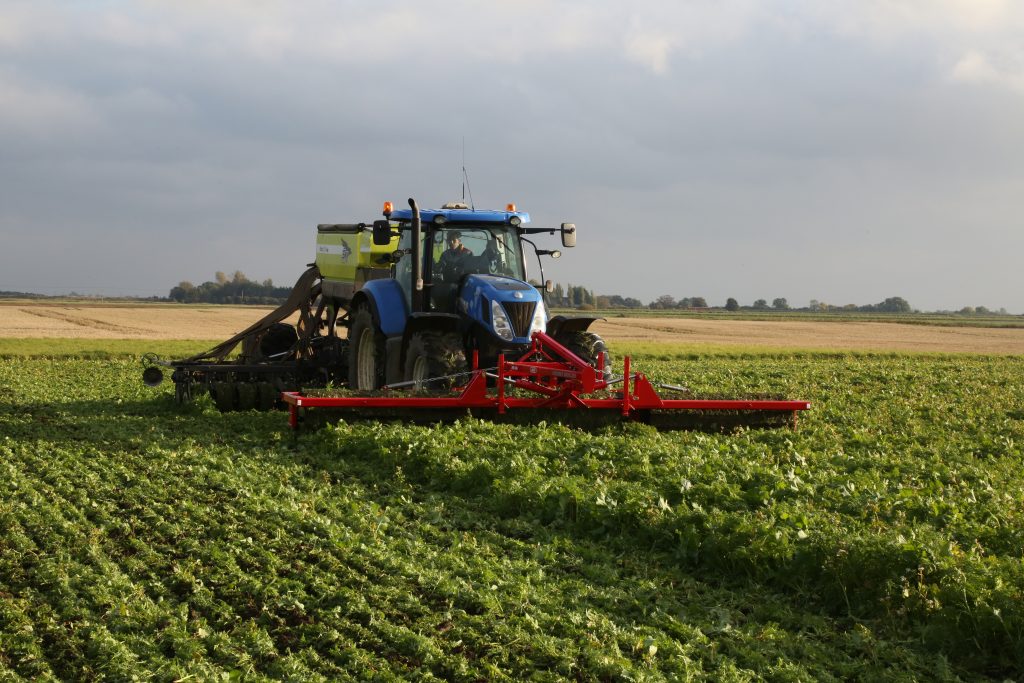 Over my life time I have seen the invertebrates in our Fenland soil gradually disappear. Carabid beetles, millepedes, centipedes, springtails have all disappeared, worms are still with us but not in the numbers they used to be. Only slugs have been able to withstand our cultivations.

When we plough the homes of these creatures get turned upside down or destroyed, others will get eaten by birds following the plough and some of them will get killed. While the invertebrates are rebuilding their homes and recovering from being tossed about in the soil they are not breeding. Harrowing also disturbed their lifestyle and so did the first power harrows which just stirred the soil powered by a 60 or 70 horsepower tractor but today’s power harrows are powered by a 2 or 300 horsepower tractor which thrash the soil as the blades turn so fast, killing everything in their path.

If we direct drill it does not affect their life and they can breed and rear young all through their breeding season.

Studies have been done that estimate that our soils will become completely lifeless and our crop yields will become less and less on many of our heavier soils if our soil health continues to decline.

Three years ago we heard of catch cropping which could improve the health of our soils. We decided to direct drill oil radish and phacelia straight after our wheat was harvested. It grew well and provided good ground cover, the next spring we sprayed the oil radish with roundup and direct drilled spring barley on that field. It was a 14ha field, 11 pairs of Lapwings came and bred on the field, they fledged young as well, Skylarks and Hares homed in on the field, it was full of wildlife. The spring barley yielded about 6 tons/ha. We do have Lapwings breeding on the farm but in 50 years of farming I had never seen Lapwings nest on that field.

We have continued to direct drill oil radish and phacelia on our worst blackgrass fields these last two autumns followed by spring barley, Lapwings have appeared on every field in the spring to breed and on one of them the nearest fields that Lapwings are breeding is a mile away, 4 pairs on each of those fields and each field has treble the amount of Skylarks on that they usually have, Corn Buntings come and scavenge the fields and one was still singing on one field on the 27th May. There are Hares on every field that has had oil radish.

As a hobby I survey my fields for breeding birds every spring and have been doing this and on many of my neighbours land as well, amounting to about 4000 acres each year. During the past 25 years and I have never come across fields that are so full of wildlife as those fields that have been drilled with oil radish. I keep all the records so I can look back on them to verify this.

Oil radish is used as a catch crop, we do not harvest it, it is used as a crop to cover the land, condition the soil, capture the nitrogen in the soil and to stop soil erosion. The crop develops a unique taproot that can reach to a depth of 5 feet, this taproot penetrates compacted soils easier than any other commonly used cover crops, growing oil radish is an alternative to flat lifting. The nitrogen that the plants capture during the winter could well have been leached by winter rainfall, becomes available to the next crop when it dies down in the spring. The land will not blow when the oil radish covers the ground and there will be far less run off or no run off during the winter.

Oil radish is a good tool in reducing blackgrass, by direct drilling the soil is not being disturbed and the invertebrates can flourish, if you haven’t tried growing oil radish it is time you did.

For the past two years we have also been direct drilling oil radish, phacelia and buckwheat after our pea crops. A week before we direct drill the winter wheat we spray the cover crop with roundup and have had just as good yields as when we were working the soil to make a seedbed. On every direct drilled crop we have seen an increase in wildlife. In autumn 2018 there were over 1,000 Lapwings on direct drilled wheat