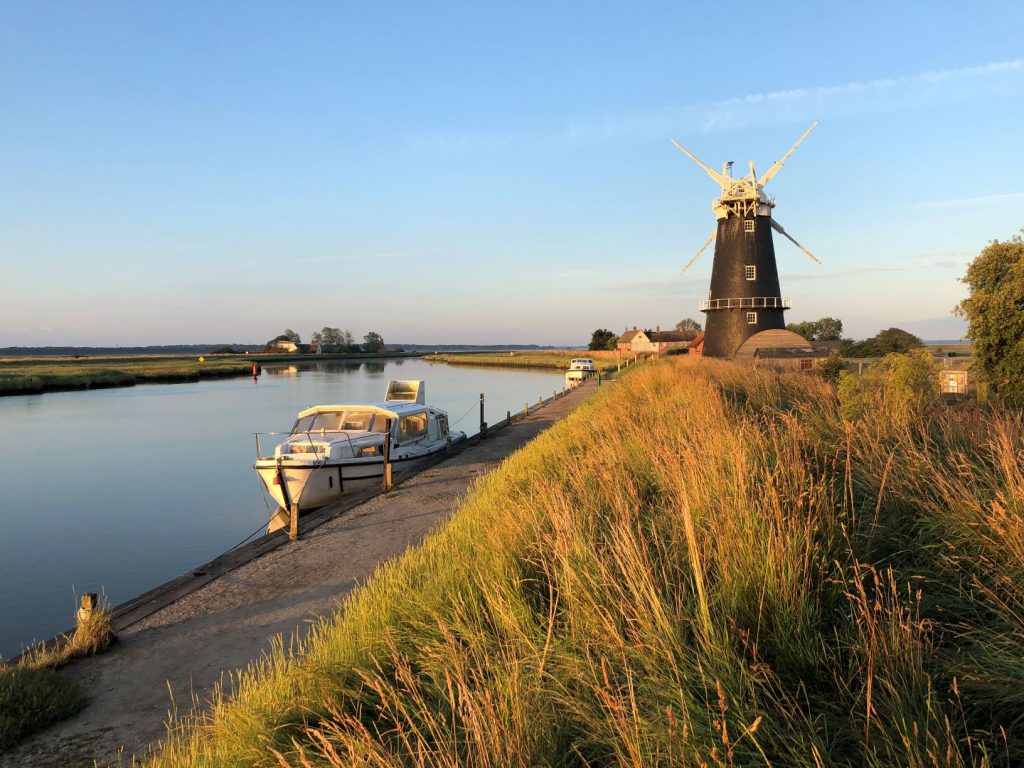 On the Norfolk Broads with Nicholas

Wondering where and how to have a holiday during the Covid pandemic, Nicholas and his wife, Anne, thought a boat on the Norfolk Broads was as safe a place as any, so they booked up a boat for a week in July 2020 but the quantity of wildlife he saw was poor. They decided on a second trip this year to see if they would be more successful.

In July 2020, every morning, I was out at 5.30am looking for wildlife on grazing marshes and I found very little. I crossed two Broads in the boat, but never saw any ducks other than Mallard. There were plenty of Reed Buntings singing away in the wide reed margins between the edge of the rivers and the banks. When I studied my OS maps, very often there was 200 metres width of river, reeds, banks, and soak dykes usually surrounded by grazing marshes. Some areas were arable, and in the upper reaches of the rivers, there were reeds with willow bushes or wet woodland. A staggering amount of superb habitat, but I was very disappointed in the amount of wildlife that I saw.

The second trip at the end of April 2021 was more successful. The first night was spent moored up on the River Bure about two miles west of Acle. I went for a 3 mile walk before breakfast along the riverbank and I was satisfied with what I saw: Shoveler, Gadwall, Redshank, Oystercatchers, Lapwings, eight species of warblers and other birds making my tally up to 48 species. The next night we moored up at How Hill nature reserve, where I walked through the reserve and along the banks of the river. The habitat was reeds and wet woodland, but I was rather disappointed with what I saw and heard, only 38 species of bird.

Early the next morning, I walked across Upton grazing marshes and back along the River Bure bank, a 4.75 mile walk with a total number of 68 bird species seen or heard. The best morning’s bird watching I have had for many years.

The 4th morning’s walk was from the Bernis Arms wind pump on the Halvergate marshes, and back on another foot path - a walk of about 7 miles before breakfast! The first part of the walk was commercial grazing, there were Lapwings and a few ducks. On the way back was through RSPB territory, where space had been made for birds and it was very good bird watching. A total of 55 species seen or heard.

The 5th morning was on the Beccles grazing marshes, there were no ducks or breeding waders. It did not look as if any farmers had taken up any stewardship options. There were many willow trees on the dyke sides and, as I was not far from Beccles town, there were plenty of dog walkers. One man told me that there were now very few Mallard on the river, which people used to feed with bread, and he thought otters and/or mink may have been the reason.

That afternoon I walked Worlingham marshes, less than a kilometre wide and, according to one couple, they had Lapwings up until this year. Lots of dogwalkers in these marshes. Three miles downstream where the grazing marshes were a lot wider, I could see from the boat that some of the marshes were still flooded and there were Lapwings, Avocets and ducks.

My last mornings walk was across Hardley marshes, half of which was arable. There were several Lapwings, Gadwall and I also saw two drake Pochard and two drake Shoveler flying around. A total of 51 species seen or heard on this 2.5-mile walk.

On every walk I heard Cettis Warbler and on four of the six walks, I heard Grasshopper Warblers.

It was the best week of bird watching I have had in the UK for many years, with a total number of 96 species seen or heard. Chinese water deer were everywhere, the most I saw on one morning was 26.

The Norfolk broads are full of fantastic habitat, and I was very impressed with what I saw, but as vermin increases and humans increase, especially dog walkers, wildlife will gradually decline if nothing is done to protect it.