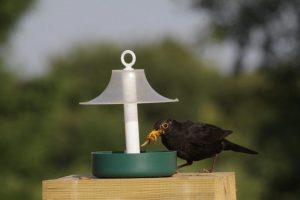 A few days back one of our customers alerted us to an advert on Facebook from another bird food company, as they were concerned that the message encouraged people to feed dried mealworms straight from the packet to their garden birds during the breeding season. We've always advocated firstly soaking dried mealworms in warm water before putting them out, so being aware of that our customer asked us to comment and specifically why we think un-soaked dried mealworms should not be put out during the breeding season.

The reason we’ve long taken this stance, is that there’s a logical possibility that some adult songbirds might feed dried mealworms to their young in the nest or their fledglings, and if the food isn’t firstly soaked in water then there’s a risk that a young bird could die of dehydration. Such a scenario might, for example, happen in an urban area where there was limited natural food for species such as blackbird and robin, and therefore the adult birds were especially reliant on food provided in gardens.

The risk is not just because chicks in the nest and fledglings are entirely reliant on their parents for moisture in food to stay hydrated, but also because the dried mealworms will absorb liquid in the stomach of the young bird. A few dried mealworms might not matter, but an excess of them – because the food was readily available and with nothing much else to take – then we think it could be a serious issue.

We should stress that we’re not aware of any scientific studies to support our position, but it does seem entirely logical and in any event encouraging adult birds to feed a dried food to their young is surely not worth the risk.

Of course dried mealworms are anyway a relatively poor substitute to live mealworms – which are rich in fluids as well as protein – but if, for any reason, you’re not able to feed the real thing to your garden birds at this time of year and therefore have to rely on the dried version, then be sure to firstly soak them in warm water for at least 30 minutes. And soaked dried mealworms are certainly better than no mealworms at all.