The humble house sparrow - and why it needs your help

If you asked most folk what they thought was the commonest bird in the UK, most would probably say the house sparrow. However, whilst that would have been true a number of decades ago, it certainly isn’t today. In fact, the commonest bird in the UK is, perhaps surprisingly, the wren, with around 8.5m breeding pairs, which compares to the house sparrows’ 5.3m pairs. Of course the wren is much more adaptable to different habitats, and this is the primary reason for its large numbers (you’ll find them breeding on remote Scottish islands through to gardens in deepest suburbia). None the less and because they are so gregarious in their behaviour, the number one bird should be the house sparrow. 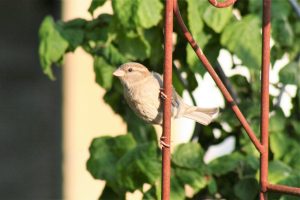 House sparrow populations have plummeted in the last four decades

Go back to the early 1970s and before that, and the picture would have been very different. Indeed, a study shows that between 1977 and 2008 the house sparrow population in the UK declined by a staggering 71%. And that decline stills continues, with the species now on the red list.
Of course for many people – in particular those living in smaller towns and villages surrounded by countryside which isn’t intensively farmed – then the house sparrow may indeed still be their most numerous garden visitor. But in town and city centres, plus in areas of the countryside which are intensively farmed, then the species is often something of a rarity or absent altogether.

The point about intensive farming is the primary reason for the house sparrow’s decline in rural areas, with the consequence of such framing practices meaning a very significant drop in invertebrate numbers – and it is insects which are vital for adults to feed to young in the nest and to fledglings to ensure successful breeding. Outside of the breeding season, quicker crop rotations and more efficient harvesting methods both result in less loose grain on the ground for the birds to feed on.
In more urban areas, the reasons for the house sparrow’s decline are still being studied but principle reasons identified by the BTO also include a reduction in suitable food (for adult birds and chicks), plus less nesting sites. On the latter, modern housing, sadly, largely excludes accessible cavities.

What YOU can do to increase house sparrow numbers

The two reasons highlighted above are clearly ones we can do something about, so our main guidance on each is: 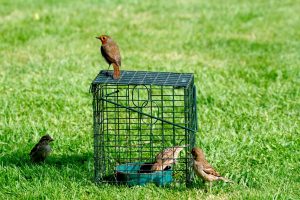 Year-round feeding from a tube feeder of a mix such as Premium High Energy could make a significant difference to local population levels of house sparrows. In addition though, feeding Live Mealworms throughout the spring and early summer months could be absolutely key to helping ensure high survival rates for young house sparrows, as the food is perfect for them and readily taken by the adult birds. And to prevent the live mealworms being taken by larger birds such as starlings, a Cage Feeder such as this one will do the job.
House sparrows prefer to nest in loose colonies, so hence why purpose-made nest boxes for them are generally of a terrace design with two or three separate entrances and nesting compartments – there are three different options on this page. So putting up at least one of these terraces on your house wall or other suitable place in the garden is great thing to do, and for guidance on ideal positioning and other related tips have a read of our advice page for nest boxes and watch the short video.

What we're doing at Vine House Farm on a greater scale

On a much larger scale and for the long-term survival of house sparrows and indeed many other once-common bird species, the solutions lay in a host of challenges around how we live, our approach and attitudes to far reaching environmental issues, and not least how our vast areas of farmland are managed. Regarding the latter, at Vine House Farm we’ve made the policy of taking tangible actions to reverse the decline in wild bird populations central to how we operate, and have done so in a way that still ensures our farm operates profitably – so proving it doesn’t have to be one or the other.
On a smaller scale – but one that becomes huge when all the similar actions by individual people are combined – creating both a home for house sparrows in your garden and providing them with the right food, is the best possible way to take positive steps which directly affect population numbers.