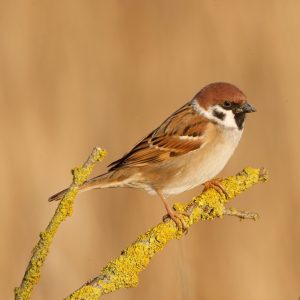 If ever a species of bird has come to embody our conservation work here at Vine House Farm, it has to be the Tree Sparrow. Indeed, Nicholas Watts has been on a long-term mission to increase breeding numbers of the species on our farm, with a measure of his success being 900 young birds already ringed this year, which compares to just 65 in 2010. So for the sixth in our series of focusing on a specific species of garden bird, this month it’s all about the Tree Sparrow.

We’ve often thought that if the Tree Sparrow wasn’t called a sparrow and also if it had a red breast, then no doubt the huge decline in its numbers over the decades would have gained a whole lot more publicity. But such is life, though in our eyes the Tree Sparrow is every bit as appealing as a Robin or, for that matter, any other small songbird. It can though be overlooked in the garden, and even we’d concede that its plumage is more ‘attractive’ than it is stunning. So let’s pick up on that point and start with identification . . .

Slightly smaller than a House Sparrow and also less associated with human habitation, Trees Sparrows are easy to distinguish from their cousins by the black spot they have on each cheek and chestnut-brown cap. In addition, both sexes are virtually identical, whereas House Sparrows are quite different.

The Tree Sparrow is a bird of woodland edges and hedgerows, though in gardens with mature trees and plenty of cover they can fairly easily be attracted – but now only in certain parts of England and in particular the Midlands and southern and eastern counties. There’s also a small population in some areas of southern and eastern Scotland and Northern Ireland. Of course food is the key way to attract them if they do live in your area, with red millet in a hanging tube feeder being a real favourite. And unusually when compared to other species of bird which use hanging feeders, the location of the feeder in the garden seems to be important to Tree Sparrows and whether or not they’ll use it: In tests Nicholas has carried out, the closer the feeder is to a hedge – and ideally a thorny hedge such as Hawthorn – the more likely it is that the species will feed from it.

As the name suggests, Tree Sparrows nest in holes in trees. They’ll also sometimes use holes in walls and even banks (there are also records of them occupying holes within Sand Martin colonies), plus nest boxes will also be taken - with the ideal hole size being 28mm. If you do decide to put a nest box or a few of them for Trees Sparrows, then locate each box out of direct sunlight (which is very important to ensure the inside of the box doesn't get too hot - which can be fatal to the young birds) and about 2 metres off the ground on a tree or a wall. Two-to-three broods are normal with 5-6 eggs in each, with both male and female birds taking part in the nest building, incubation and feeding the young birds.

So why not follow our lead and see if you can do something positive to help Tree Sparrow numbers in your area. A start point is the tube feeder filled with red millet, the second step is a nest box or two – or even more if you have a big enough garden as the species likes to breed in small colonies –and, if you haven’t done so already and have the space to do so, then planting a native hedge of hawthorn (even if just a very small one) will also increase the appeal of your garden to this delightful little bird.